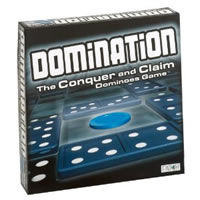 How To Play Domination (Instructions)

Domination is challenging and suspenseful while a classic in its simplicity. Players play their dominoes on the board game, trying to complete squares ton conquer and claim territories. When all the dominoes have been played, the game is over. All the players count up the number of territories they've claimed. Whoever has dominated the most territories on the board game wins the game of Domination.

The game Domination should come with the following components. These are based off of the original game and don't include components from any expansion packs or different editions.

To be the master at Domination you need to dominate the game board by conquering and claiming the most territories.

Please keep in mind that the official Domination rules and instructions could be different depending on the game version you have. The rules below are some of the exact directions that came in the original packaging and will teach you how to play Domination. Download these original PDF game rules or print them for later use.

Share with us your comments, funny stories, tips, advice, strategies, creative ways to play, questions about how to play, problems with the directions or anything you want about Domination. All submissions will be reviewed within 24 hours.

George says:
Thanks for the info. I love dominoes so I'll have to give this game a try. After reading through the game rules it seems like a fun game.
©2023 Board Game Capital - About Us