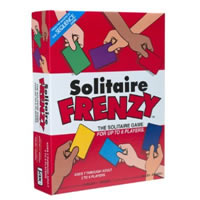 How To Play Solitaire Frenzy (Instructions)

Solitaire Frenzy is one fast paced game! Each player (up to six players) has an entire deck of six different color-coded cards. Once "GO" is yelled everyone go crazy trying to get rid of all their cards in a Solitaire like fashion. Blocking your opponents is allowed - if you have time that is.

Points are added up at the end of the game and any cards in your possession at the end of each round count against you and the cards to placed on the board count for you. The player with the most points is the Solitaire Frenzy winner. Solitaire Frenzy is a great game for the whole family and is a blast to play. Play this game today!

The game Solitaire Frenzy should come with the following components. These are based off of the original game and don't include components from any expansion packs or different editions.

Get as many of your cards on the game board as quickly as possible! Cards must be put on the board in matching suits and in order from lowest to highest.

Please keep in mind that the official Solitaire Frenzy rules and instructions could be different depending on the game version you have. The rules below are some of the exact directions that came in the original packaging and will teach you how to play Solitaire Frenzy. Download these original PDF game rules or print them for later use.

Share with us your comments, funny stories, tips, advice, strategies, creative ways to play, questions about how to play, problems with the directions or anything you want about Solitaire Frenzy. All submissions will be reviewed within 24 hours.

Ruth says:
My friend loves solitaire so I'll have to recommend this game and see if she likes it. She isn't to keen on learning how to play new games but maybe I could read the rules and tell her how to play.
callie schwerin says:
i had never played this game.
©2022 Board Game Capital - About Us