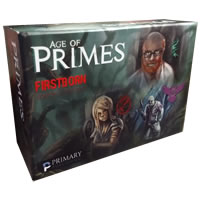 How To Play Age Of Primes (Instructions)

Take on different roles in an attempt to recruit followers and accumulate the most prestige. This story-driven episodic card game takes place in a unique sci-fi setting where after many years in space, a group of humans crash-land on a remote alien world. There, the game begins as you'll split into different factions and embark on your journey.

Age Of Primes is a game filled with possibilities and strategy. Learning how to play is surprisingly simple and with the ever evolving story line, you'll be sucked into this clever world and really enjoy playing this card game. Give Age Of Primes a try today. 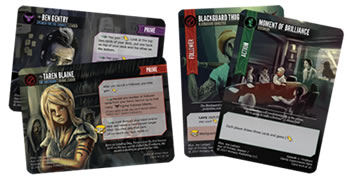 Not to start the review on a sour note but we wanted to tell you up front who the target audience for this game is - it's not for everyone. If you're into episodic sci-fi card games that are story-driven where players take on different personas and fight to acquire the most prestige for their house, then Age of Primes is for you. While anyone could play the game, we think it will only really excite those that are into these types of games - it is not a casual card game that can be explained in under 2 minutes.

Now, having said that, the game rules for this card game are surprisingly simple. We were expecting a thick and lengthy rule book but found only a small, concise and picture filled rule book that quickly explained the game. Even the rule book admitted the best way to learn how to play the game was to play it. While we felt like we entered the game not really knowing exactly what we were doing, we quickly caught on. By the end of the first game, we were well versed in the game's capabilities and obviously played again with much more enjoyment.

Aside from the possibilities that can occur during the game by choosing to play different personas, players have the choice to choose from prebuilt decks or even custom decks allowing this game to transform and be completely unique to each player. We thought this was a nice added bonus to the medium to hardcore gamers that really want to strategize and personalize their game. Additional episodes are even planed that you could use to expand to your game. 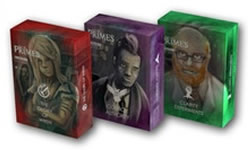 The game is high quality and has some very stunning artwork on the cards. We felt the text on the decks was a little small but other than that, they were designed very well. The sturdy small storage box contains all the decks of cards and rules nicely making it a very portable game. You'll have a few cards in front of you so you will need a little bit of room on the table but not like other games we've seen that look completely overwhelming with numerous gaming components.

Overall we felt like Age of Primes achieved its goal in the game and is a nicely done episodic sci-fi card game. While it's not going to appeal to everyone, we felt like it might interest more than you'd think if they gave it a chance. We enjoyed playing it.

The game Age Of Primes should come with the following components. These are based off of the original game and don't include components from any expansion packs or different editions.

The game ends when any player reaches 25 Prestige.

Please keep in mind that the official Age Of Primes rules and instructions could be different depending on the game version you have. The rules below are some of the exact directions that came in the original packaging and will teach you how to play Age Of Primes. Download these original PDF game rules or print them for later use.

Share with us your comments, funny stories, tips, advice, strategies, creative ways to play, questions about how to play, problems with the directions or anything you want about Age Of Primes. All submissions will be reviewed within 24 hours.