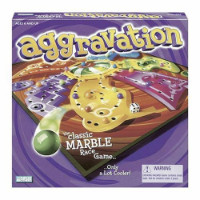 How To Play Aggravation (Instructions)

Aggravation is a game where a lot of scream and hollering takes place but all in good fun. Depending on the number of people playing this game, game time ranges from 30 to 60 minutes. Try playing the game Aggravation today!

The game Aggravation should come with the following components. These are based off of the original game and don't include components from any expansion packs or different editions.

The winner of Aggravation is the player that can get all four of their marbles from their starting base to their home base.

Please keep in mind that the official Aggravation rules and instructions could be different depending on the game version you have. The rules below are some of the exact directions that came in the original packaging and will teach you how to play Aggravation. Download these original PDF game rules or print them for later use.

Share with us your comments, funny stories, tips, advice, strategies, creative ways to play, questions about how to play, problems with the directions or anything you want about Aggravation. All submissions will be reviewed within 24 hours.

Janice Wood says:
I have the game that my uncle made in the 1950’s. It has only 4 players and does not have a corner star but it does have the middle space. I’ve read the rules so will have to adapt minor changes since it is a 4 played rendition.
wanda says:
in the original it is acceptable my great uncle created this game
Staci says:
I could not think of a better name for this game. I got so frustrated (in a fun kind of way) as I tried over and over to win. We didn't have a set of rules to learn how to play, we just asked our parents. The more people you have playing the more difficult it is.
Chris Russell says:
If two people on the same team purposely avoid sending the other home, is that acceptable? Isn't that what the game is all about?
©2022 Board Game Capital - About Us