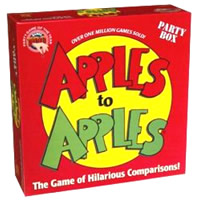 How To Play Apples To Apples (Instructions)

Apples to Apples is an interesting card game that depends on those you are playing with to set the pace. It can be hilarious, truthful, serious, or just plain goofy. Players receive word cards and must match one of their words with an adjective chosen by one of the players. The owner or originator of whose ever card gets chosen wins a point.

It is said that the adjective cards you receive for points explain your own personality but this usually isn't the case. Apples to Apples can be fun for large groups where not a lot of strategy is needed.

The game Apples To Apples should come with the following components. These are based off of the original game and don't include components from any expansion packs or different editions.

Win the correct amount of green apples that are required to win the game (changes on the amount of players) by being the chosen and favorable card for the round.

Please keep in mind that the official Apples To Apples rules and instructions could be different depending on the game version you have. The rules below are some of the exact directions that came in the original packaging and will teach you how to play Apples To Apples. Download these original PDF game rules or print them for later use.

Share with us your comments, funny stories, tips, advice, strategies, creative ways to play, questions about how to play, problems with the directions or anything you want about Apples To Apples. All submissions will be reviewed within 24 hours.

Jessica says:
Apples to Apples game rules are so close to other games. I swear there are multiple games with the same game play but under different names and different topics/cards.
Camile says:
Apples to Apples is one of those games that has no strategy other than trying to win over the heart of the person who is picking. Even at that, a card that you think really fits may not be the one they choose throwing any strategy out the window. It is a luck based game and at times is funny but mostly is a bore - in my opinion.
Sarah says:
Thanks for the game rules! We were having a hard time remembering some of the directions on how to play in certain circumstance and we have everything resolved now. Great to have an online version.
Curtis says:
The rules are easy to how to play but it's one of those games where you really have to adapt to those whom you're playing with picking cards that they'd like or choose above others and not necessarily cards that you think would/should win.
Carly says:
I love this game! check out this sketch about it, it is so funny if you know apples to apples http://www.youtube.com/user/WafflePlusPancake
Mimi says:
I love this game! I can never stop laughing while playing it. It can be so random but that's proablly what I love about it! You really get know peoples likes and dislikes. If you don't have it go get it!
Joel says:
If you don't like this game, it is likely you can't read!! The most fun party game I have played and I have played them all...A must have..
Diana says:
I love this game. You get a goofy group of people together and you never know what is going to be said! It is hilarious!!!
Dallas says:
Not one of my favorite games. I guess it totally depends on who you're playing with that makes it fun.
©2023 Board Game Capital - About Us