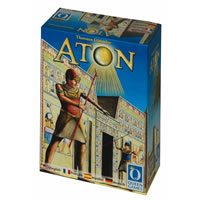 How To Play Aton (Instructions)

The whole of Egypt is in uproar - Akhnaton, who has just acceded to the throne, wants to ban the old deity Amon from the temples of the land. Aton is to be worshipped as the new God. But the priests of the land are not willing to give up their temples without resistance so the 4 largest temples are fiercely disputed.

The players are adversaries and fight out this battle of the Gods between them. Both have the same starting position, but who will be able to make better use of his abilities and help his God to victory? Test your luck and strategy with the game Aton today!

The game Aton should come with the following components. These are based off of the original game and don't include components from any expansion packs or different editions.

In Aton, make the best use of your abilities and help your God to victory first.

Please keep in mind that the official Aton rules and instructions could be different depending on the game version you have. The rules below are some of the exact directions that came in the original packaging and will teach you how to play Aton. Download these original PDF game rules or print them for later use.


We are on the hunt for more information about Aton but have not found anything yet. If you have any information regaring the Aton game rules or instuctions let us know and we will add it to this page. We will post any updates to this page as soon as we find it.

Share with us your comments, funny stories, tips, advice, strategies, creative ways to play, questions about how to play, problems with the directions or anything you want about Aton. All submissions will be reviewed within 24 hours.