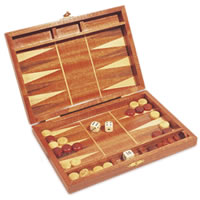 How To Play Backgammon (Instructions)

Backgammon is a one of the oldest board games still around today with some of it origins dating back as far as 3000 BC. Some improvements have been made to create the game we know now.

Backgammon is typically a two player game where you try to move your men from point to point around the board until you have brought all of them to your inner table and eliminated them from the game. This can also be achieve by playing in teams with one player as the team captain moving and rolling the dice.

The object of the game of Backgammon is to move your men from point to point around the board until you have brought all of them to your inner table and eliminated them from the game.

Please keep in mind that the official Backgammon rules and instructions could be different depending on the game version you have. The rules below are some of the exact directions that came in the original packaging.

Share with us your comments, funny stories, tips, advice, strategies, creative ways to play, questions about how to play, problems with the directions or anything you want about Backgammon. All submissions will be reviewed within 24 hours.


Tim says:
I remember playing this game as a kid but we had no clue how to play and there were no rules (this was before the internet mind you). We always made up our own rules and just liked playing with the smooth circles on the nice wooden board. Funny thing is I still have no clue how to play.
Jodie says:
I have always like backgammon because of the nice wooden boards that can be made for it. I think they look really pretty. Some even have a place for the rules although I guess you could put them inside the game board.
Huge List Of
Free Board Game
Giveaways!