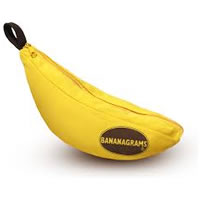 How To Play Bananagrams (Instructions)

Possibly the best travel game of all time, Bananagrams is great to take with you wherever you decide to go. From its fun Banana storage bag to the very easy game play, you'll relax as you play this game (and even eat a real banana - not included). Younger kids can take part in this educational game and adults can battle it out using as much creativity as possible.

Bananagrams is simple; there is no score. No need to learn complicated rules or read through pages of game instructions. All you need to do is correctly place down words and be the first to get rid of your tiles. That's it! Inexpensive, easy to transport, easy to learn, a blast to play with new challenges every time - what more could you want. Pick up Bananagrams and play it today!

If you can successfully use up all your letters then you are the Bananagrams game winner.

Perparation: To get ready to play Bananagrams, you'll need to form the bunch. This is done by placing all 144 tiles face down in the center of the table. Each player then takes the amount of tiles listed below to start their pile.


Game Play: The game begins when someone calls out "split." At that point, everyone will turn their tiles face up. The race is on to arrange them in their own intersecting word grid. You can rearrange your words as often as you'd like and they must be read from left to right or top to bottom.

When any player places their last face up letter in their grid, that person calls out "peel!" All players must then take another tile from the bunch and add it to their pile to be placed into their grid.

"Dump" can be called out when you trade one of your letters, face down, back into the bunch in exchange for three more letters. You may dump as many times as you'd like but you must draw three more letters each time to you. This has no effect on the other players.

When the bunch is depleted (the pile of letter in the center) to fewer tiles than number of people playing, the first person to use all their letters in a connected word grid and call out "bananas" wins that hand. They are declared to be the Top Banana. Their title gets stripped from them and the game resumes if other players find a misspelling, a proper noun, an abbreviation or any other non-valid word. "Rotten Banana" is called out and the game resumes with the guilty player kicked out of the game.

Please keep in mind that the official Bananagrams rules and instructions could be different depending on the game version you have. The rules below are some of the exact directions that came in the original packaging. Download these original PDF rules or print them for later use.

Share with us your comments, funny stories, tips, advice, strategies, creative ways to play, questions about how to play, problems with the directions or anything you want about Bananagrams. All submissions will be reviewed within 24 hours.