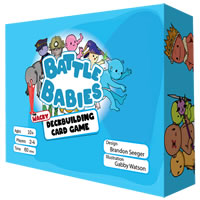 How To Play Battle Babies (Instructions)

Babies can be cute and cuddly but did you know they can be part of your baby army as you battle for ultimate baby power? Battle Babies is a strategic card game where players build their decks in hopes of conquering the fight with your opponent's baby army. If their health drops and you're the last one standing then you'll win.

Battle Babies has cute babies, creepy babies and just flat our weird babies but this is part of why this game is interesting and fun to play. Gather up to four people, ages 10 and older, to play this hour long card game. Learn how to play with the game rules below. Add a new game to your collection and purchase Battle Babies today.

There are all types of games out there and now there is one about weird looking babies battling against each other. Well, they aren't all weird...a handful of them are in some silly costumes. Battle Babies is a strategy deck building game. If you're into these types of games, this one will be unique and challenging (in a fun way). If you're not, the rules, attacks, decks and special abilities might be a little overwhelming. Nothing against this game - just saying this is the type of game it is.

Moving on, we got a kick out of these crazy babies! Some we are still not quite sure what's going on but it made the game more light and casual. You'll definitely catch people's attention if you play this in public. The art work is a very simple hand-drawn style. The cards have a lot of helpful icons on them (attack and shield strength, bottles, etc.). Different types of cards looked different enough so cards didn't blend together. We thought the cards were nicely done. We were also impressed by the quality of materials used for this game. It comes in a nice and sturdy box (with a divider) and the cards have a nice textured feel to them.

Game play is fun, challenging and very strategic. Ration decks, card market, battle decks, character decks, your hand, discard pile, passive cards, active cards and a few more are all part of the layout. We liked the special abilities which help throw a wrench in the plans. We really liked the health tracker and the use of a card to know where you are (just don't bump it). There are a lot of options in the game so there is plenty of strategy going on. The table can get pretty confusing with so much going on but you catch on quickly.

The game rules are written fairly well. With that said, if you're not familiar with deck building games, they will seem daunting and somewhat overwhelming. Once you play your first game, you'll have a much better grasp on how to play. The images in the rules help and they even have made a how to play video that helps even more. A QR code in the rule book would help more people find and utilize that video.

Battle Babies is a very entertaining card game. It was fun seeing a somewhat serious style of game played with such a lighthearted theme and zany graphics. It kind of reminded us of the movie Baby Boss where the babies have a secret world that the adults don't know about. This game is definitely worth picking up and adding some variety to your game collection.

The game Battle Babies should come with the following components. These are based off of the original game and don't include components from any expansion packs or different editions.

If you can eliminate all opponent baby armies then you'll win.

Please keep in mind that the official Battle Babies rules and instructions could be different depending on the game version you have. The rules below are some of the exact directions that came in the original packaging and will teach you how to play Battle Babies. Download these original PDF game rules or print them for later use.

Share with us your comments, funny stories, tips, advice, strategies, creative ways to play, questions about how to play, problems with the directions or anything you want about Battle Babies. All submissions will be reviewed within 24 hours.

angie keats says:
hope I win this giveaway battle babies :)
Tracy Uptain says:
We love trying new games,
Kelly VanAuken says:
I like the babies theme.
christina moore says:
I like the babies, and 2 players can play
Scott says:
Looks interesting.
Gun Coaty says:
deckbuilding games in general throw a bunch of individual circumstances at a player and your objective is to optimize what happens. You inexorably get better over multiple plays.
Laura Gardner says:
This looks really cute and like it would be so fun to bring to the table!
Sue says:
Sounds like something my cousins would like. Thanks for the giveaway.
Albaro says:
Not sure if this is a game I would like but I could certainly give it to a friend that would like it.
Heather says:
This looks really cute and fun.
Jeremy says:
Just when you think you've seen it all...what a crazy funny game. Looks fun.
©2023 Board Game Capital - About Us