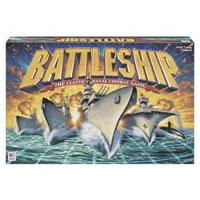 How To Play Battleship (Instructions)

Set up is quick and game play doesn't take too long. Battleship is an easy game for all ages.

The basic object of the game of Battleship is to hide your five ship fleet somewhere on your ocean and by calling out basic coordinates, find your opponent's fleet before they find yours. Battleship is an old favorite Navy Game and is great for passing a few extra minutes and is perfect as a travel game.

The game Battleship should come with the following components. These are based off of the original game and don't include components from any expansion packs or different editions.

To become the winner of Battleship you must be able to find (sink) all five ships in your opponent's fleet before they sink yours.

Perparation: The easiest way to set up the game of Battleship is to sit facing your opponent with each target/ocean field facing away from each other. You should not be able to see your opponent's hidden fleet. The Battleship rules state that each player should hide all five ships secretly somewhere on their ocean. Each ship has two anchoring pegs that must be pushed through the holes on the ocean grid. All holes on the ships must align over the holes of the ocean board. It is against the rules to place any ship diagonally on your ocean. Once all ships have been placed and each player announces that they are ready, the game of Battleship begins. Changing the position of your ships during the game is also against the rules.

Game Play: The basic Battleship rules and instructions for playing the game are each player calls out one shot (or coordinate) each turn in attempt to hit one of their opponent's ships. To “hit” one of your opponent's ships, you must call out a letter and a number of where you think one of their ships is located. The instructions state that once a shot is called, the opponent must immediately call out “hit” or “miss.” If one of your ships gets hit, place a red peg over the hole location on your ships that was called out. If calling a shot (or trying to hit your opponent's ships), mark a red peg (if a hit was made) or a white peg (a miss) on your target grid located on the lid or the vertical divider between you and your opponent. This will help you keep track of your hits and misses in your hunt to find their ships.

Once all holes on a ship have been filled with red pegs, your ship has sunk and must be removed from the ocean. You then announce which ship has sunk. The Battleship rules on successfully sinking a ship are as follows: Carrier - 5 hits, Battleship - 4 hits, Cruiser - 3 hits, Submarine - 3 hits, Destroyer - 2 hits. It is considered cheating and against the Battleship rules to be dishonest on the location of your ships.

Different Battleship rules and instructions are available or can be made before player. One popular version of Battleship is called Salvo.

Salvo Rules: Most Battleship rules apply but with few variations: Each player calls out five shots at a time. Once all five shots have been fired, the opponent then announces where and on what ships the hits were made (if any). This rules change, however, when a ship has been sunken by eliminating one shot in your turn for every ship you sink.

Advanced Salvo Rules: After all shots have been fired, the opponent only announces the number of hits that were made. They do not announce on which ship the hit was made or where it was hit. Keeping track of where you think your hits are can be a bit tricky and might be advisable to have a piece of paper near by.

Please keep in mind that the official Battleship rules and instructions could be different depending on the game version you have. The rules below are some of the exact directions that came in the original packaging. Download these original PDF rules or print them for later use.

Share with us your comments, funny stories, tips, advice, strategies, creative ways to play, questions about how to play, problems with the directions or anything you want about Battleship. All submissions will be reviewed within 24 hours.

paige says:
can ships be set adjacent to each other- a ship running vertical and then another ship tacked onto the end horizontal? Once both are hit, would you need to announce second ship hot? Is it required to tell which ship has been sunk?
Lesleigh says:
What do you do if for example you call out F6 and it's a miss on your oppnent's board but you have a ship there. What peg do you put on your ship? Or if you both have a ship in the same spot, how is it marked?
Mrs williamson says:
Can you buy more ships????? I bought this at a car sale an ships are gone. Thanks mw 419_560_3702
Nick says:
I haven't played Battleship for years. My son just came home from a friend's house and wanted to play but he had all kinds of crazy rules. I needed to know how to play officially to set him straight on how to play right. Thanks for the rules.
Jean says:
Have a battleship game with card but no instruction to tell how to use the cards please help
Michael says:
If you hit the opponent can you hit it again?
darb says:
My step dad says you can overlap ships but I think it's cheating he also says you can hit the same spot more than once
steven says:
Bro I played this game way back when I was 10 now am 19 and am just now starting to play this with my little brother and sister
Justin says:
A buddy of mine wants to know, if someone was to sink the battleship first before all the other ships. Does that mean he wins or does he keep on playing until all the others are sunk too?
Joe says:
Once a ship is hit does the person that called the hit call it again or does the person that got hit go ?
Amy says:
Loved this as a child just brought my children it today
Susan says:
His do you mark when you have missed on a ship but the other opponent has hit your ship at the same time?
Tyson says:
I never knew there were alternate rules on how to play battleship! I'll deffinately have to try them out next time I play.
Navy Chief says:
Played with my brother back in the 70's. Now with my kids. They like it.
June says:
I played this game with my children 30 years ago. I still have the game, minus the directions & now I play it with my grandson & he loves it!
JAF says:
great game to play over the phone for those long distance relationships.
Billy B. says:
Classic game. I remember playing this as a kid.
©2022 Board Game Capital - About Us