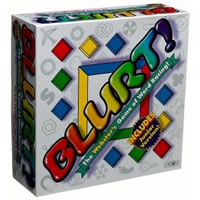 How To Play Blurt (Instructions)

Blurt is a fast board game where players or teams race to the finish by blurting out the words they think fit the descriptions read. There is no penalty for blurting out the wrong answer. In Blurt, you just keep blurting out words until the correct one is named. Blurt is the Webster's game of word racing.

Have fun with your friends and family and expand your vocabulary as you try to blurt out the correct words. Try playing this board game today!

The first one to return to start, after going all the way around the game board, is the winner (landing there by exact count is not necessary).

Please keep in mind that the official Blurt rules and instructions could be different depending on the game version you have. The rules below are some of the exact directions that came in the original packaging.

Share with us your comments, funny stories, tips, advice, strategies, creative ways to play, questions about how to play, problems with the directions or anything you want about Blurt. All submissions will be reviewed within 24 hours.


Matt says:
I figure the rule @Joanie refers to is a typo -- We play it where that if you land on the same color square as the lead player, then you can challenge them. (Then there's no cheating by choosing a orange marker)
Joanie says:
We are frustrated with the rule about landing on a s square that matches the color of your pawn. There are only 4 colors represented by squares on the board and more pawn colors than that. How do you handle this problem?
Burt says:
My wife is a big fan of this game and insists we play it at every get together. I probably have the game rules memorized after hearing her explain how to play so many times. Fun game but some of the clues I've heard over and over so it's a little easier for me to play.
Tim Walsh says:
A NEW version of Blurt is out with 1,800 new clues! Check it out at: http://www.playblurt.com/
Huge List Of
Free Board Game
Giveaways!