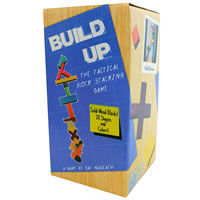 How To Play Build Up (Instructions)

You may have played a block stacking game before as a kid but now you get to do it as an adult with strategy, revenge and pure greed to win. Build Up is a block stacking game where players are trying to set up the next player to fail and make the tower topple over. Don't fall victim to your opponents and be sure you can place the next block safely while making it very challenging for the next player to place their block.

Build Up is a great party game that includes just about anyone (even kids younger than the suggested age can play with help). With up to six players allowed to play, you'll have a blast trying to earn 30 points before your opponents do. How steady are your hands and how challenging can you make your next move? Try Build Up today!

Board Game Capital's Review:
(2017-12-11)
Build Up is not your average block stacking game you played as a kid. Build Up takes things to a whole new level by reversing game flow direction and changing the starting player each round, adds in useful action cards and provides some very interesting shapes to stack. How much fun can you have by simply stacking blocks - a lot! 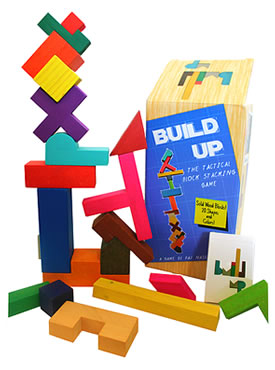 When we first opened the box we found a neatly stacked package of colorful wooden blocks and a small deck of cards. The box seemed a bit oversized at the time but after cleanup was done, everything was thrown back into the box (in a not so neat fashion) and the box fit the contents perfectly. The box is made of sturdy cardboard, the blocks were nicely made and dyed an array of different colors, and the cards were made with good quality glossy materials so they should hold up fairly well game after game.

After reading through the rules on the two extra cards in the deck, we were off playing and immediately players were out to make the most challenging stack up possible. The two elements of luck in this game is the blind card selection and the luck to be able to place game piece without it falling (some would argue that is skill). Saving certain action cards and playing others at the right time plays a huge roll in helping you win. You'll need to be creative in placing your block but not too daring as to make the tower fall.

We all loved playing Build Up and found the game limit of 30 points was perfect. We played a few rounds and the tension/competitiveness reached a fun height before the game was over. Scoring was really easy and we just kept score on a scratch piece of paper.

Our only complaint was the quality of images used on the box and the cards. They could have been a little higher resolution. That said, the creators of Build Up have already designed a newer artwork that looks amazing, colorful and fun! Also, keep in mind these are solid, quality made wooden blocks so when the tower falls, it can create quite the noise and put a few dings in softer wood tables.

Build Up uses fun and creative color shaped blocks that all have a very interesting challenge to overcome when stacked correctly. We would definitely recommend Build Up as a fun and competitive quick game to play with friends and family.

The game Build Up should come with the following components. These are based off of the original game and don't include components from any expansion packs or different editions.

If you can earn 30 points before your opponents can you'll win.

Please keep in mind that the official Build Up rules and instructions could be different depending on the game version you have. The rules below are some of the exact directions that came in the original packaging and will teach you how to play Build Up. Download these original PDF game rules or print them for later use.

Share with us your comments, funny stories, tips, advice, strategies, creative ways to play, questions about how to play, problems with the directions or anything you want about Build Up. All submissions will be reviewed within 24 hours.

April says:
I just played this game with my 3 year old and she was so excited to play with Mom and big sister. Big sister was excited because she kept winning from her little sister knocking the tower over. Win win for both. Great game!
Ray says:
Hello, Thank you for this nice and well written review! (I designed Build Up, so my opinion on the game may be biased :) ) I just wanted to add that Build Up fans can see pictures of other's crazy towers, or share their own, with the hashtag #buildupblockgame Thanks again, and have fun playing everyone!
Carie says:
Awesome family game. Everyone got involved even if they weren't the ones actually playing. It was easy for the younger kids to catch on an play as well. This will be at every family get together from now on!!
Heather says:
Awesome game. I had so much fun playing. I loved the bright colors, fun shapes and simple concept. One I for sure want to play again.
©2022 Board Game Capital - About Us