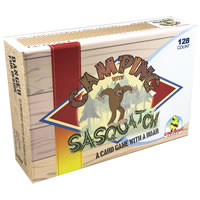 How To Play Camping with Sasquatch (Instructions)

Have you ever played a card game where the player with the best ROAR goes first? How about when you have one card left you are required to ROAR if you don't want a penalty? Camping with Sasquatch is a wild camping game where players try to collect matches while using Sasquatch to their advantage. 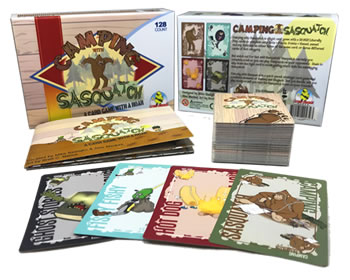 I don't know if we've ever heard the saying, "never judge a game by its storage box" but we judged this game when we first saw it and felt it. We thought it looked awesome and boy were we right. We got so excited when we saw all the fun detail that was added. It's a camping game and the box looks like a box of matches - genius! I can't say I've ever looked at all 20 sides to a game storage box and found fun things on 18 of them! Lethal Chicken Games (the manufacturer) put a lot of effort into their box which could only lead to a super fun game.

And with that transition, we won't waste any more time - this Camping with Sasquatch game is on fire (in a good way). It's our new favorite game! Making a game that is fun, easy and very entertaining for kids as young as 6 years old up to grandparents is harder than it seems. We love to see games in this genre that appeal and apply to 90% of the public out there. It's super easy to learn how to play since it uses some very simple and familiar game mechanics (Rummy meets Slap Jack meets Uno). We felt the rules were a little too short and concise and left out some helpful details to the game but overall they were understandable. How hard is it to get a matching pair of three? We thought the game would be over in seconds but oh no, some games go on and on but finish in under 15 minutes. Get ready for some fun twists and turns in the game and the all powerful wild Sasquatch.

The pictures on each card were cute, the component quality is high/durable and a rule book that folds out into a funny Sasquatch poster was just a fun touch. Getting the surprise of each Sasquatch card and what it's up to was exciting. Taking this game on a campout would be so much fun. Two player games have slightly different rules and have a different gaming experience than playing with a larger group.

Other than the Sasquatches sometimes being hard to spot, the only thing we were slightly disappointed with in this game was perhaps a fun missed opportunity that could still be corrected. On the inside lip of the bottom half of the storage box there is a QR code with this next to it, "Shhhhh! Here's the secret link to the Sasquatrap" along with some more suspenseful clues. We scanned the code in excitement and suspense only to find it linked to their game page on their website. A funny picture or a crazy video of Sasquatch would have been so much better. Perhaps this will change in the future?...

The game Camping with Sasquatch should come with the following components. These are based off of the original game and don't include components from any expansion packs or different editions.

The camper with the most points wins the game.

Please keep in mind that the official Camping with Sasquatch rules and instructions could be different depending on the game version you have. The rules below are some of the exact directions that came in the original packaging and will teach you how to play Camping with Sasquatch. Download these original PDF game rules or print them for later use.

Share with us your comments, funny stories, tips, advice, strategies, creative ways to play, questions about how to play, problems with the directions or anything you want about Camping with Sasquatch. All submissions will be reviewed within 24 hours.

Meg says:
What a fun game! My kids loving playing with the "monkey", "sasquatchy" or "sassy-squatch" depending on which one is saying it. Great for kids as young as 4 (with a little help). New family favorite.
©2023 Board Game Capital - About Us