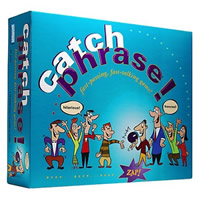 How To Play Catch Phrase (Instructions)

Catch Phrase is a great party game that gets everyone riled up and screaming at each other in a fun and exciting way. Catch Phrase is a simple and easy game to learn how to play (most already know how) and has few things to set up. You can play it just about anywhere and is an easy game to take with your where ever you might be going.

The game is played by splitting up into two different teams and each player takes turns trying to get his team to guess a given word without actually saying it. The catch is, there is a timer. If you or anyone on your team is caught with the disk player (what gives out the guessing words) in their hands during your word or phrase when the timer goes off, the other teams advances on the board. You have got to be a fast talker, a good guesser, and a quick passer to win at Catch Phrase!

To win the game of Catch Phrase, your team must go from Start to Finish on the Catch Phrase board by not allowing anyone on your team to be still holding the disk player when the buzzer or timer goes off. Your team must be fast talkers, good guessers, and quick passers.

Perparation: First make sure your batteries are installed and properly working on your Catch Phrase timer. Divide yourselves into two different team. The Catch Phrase rules and instructions do not state how exactly you should sit but it is best to sit in a circle alternating every other person as a member on your team. Place the board and timer in the middle of the circle or between the two teams. Place the two team movers on the Catch Phrase board on the Start location. Insert and install the first rotating disk into the player.

Game Play: Pick a team to begin the game with the first word. The first word is started by pressing the green button on the side of the disk player to reveal the new word. This is done while the opposing team start the timer. The person with the first word begins to give clues and the team members start shouting out their guesses until the correct word has been yelled out.

The rules on giving clues are such that you are allowed to make any physical gesture and almost any verbal clue. It is however, against the Catch Phrase rules to say a word that rhymes, give the first letter or say part of the guessing word. If a team member breaks one of these rules and is caught, the timer is stopped and the other team is awarded a point by moving them one place forward on the board.

A bonus point can be earned for stealing a word. If the timer goes off in the middle of your turn and your team has not guess the correct word, the other team has one chance to guess the word you were trying to get your teammates to say. The Catch Phrase rules state that if the correct word is guessed (only one guess is allowed and can be discussed amongst the other team), they move ahead one more space. Two points are awarded from not being stuck holding the disk player and guessing the opposing team's word. Whether they get it or not, the team that got stuck with the disk player begins the next round.

If for any reason you run out of words and they begin to repeat themselves, simply stop the timer, reload the disk player and begin again.

Please keep in mind that the official Catch Phrase rules and instructions could be different depending on the game version you have. The rules below are some of the exact directions that came in the original packaging.

Share with us your comments, funny stories, tips, advice, strategies, creative ways to play, questions about how to play, problems with the directions or anything you want about Catch Phrase. All submissions will be reviewed within 24 hours.

We usually have three generations playing at one time. Ages ranging from 10 to 60 yrs. old. What a blast!
Laddie says:
The rules don't clarify whether the guesser has to guess the exact phrase... or if they can guess part or most of it and that's good enough for a pass. Example: having "Pin and Ink", the reader says, thing that goes in a pin, the guesser says Pin Ink, and the reader passes. Is that a legidamate guess? or does the guess have to be exact?
Rachel K. says:
Catch Phrase is one of my favorite games! There is hardly any setup and few pieces. It's easy to learn and most people already know how to play. I love playing it with larger groups. I give Catch Phrase a 10!
Huge List Of
Free Board Game
Giveaways!