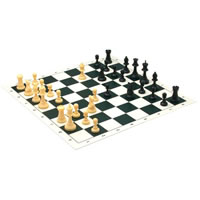 How To Play Chess (Instructions)

Chess is a game played for fun or for competition. It involves two players who strategically try to outwit their opponent as they try to be the last standing on the game board. Each player has sixteen pieces with which they go against their opponent.

Players start with one king, one queen, two rooks, two bishops, two knights, and eight pawns. Players try to out-smart their opponent in order to take their King. When a player manages to capture the King the game is over and the other player has won.

The game Chess should come with the following components. These are based off of the original game and don't include components from any expansion packs or different editions.

Force your opponent into Checkmate, by forcing his or her King into a position where it cannot move without being captured.

Please keep in mind that the official Chess rules and instructions could be different depending on the game version you have. The rules below are some of the exact directions that came in the original packaging and will teach you how to play Chess. Download these original PDF game rules or print them for later use.

Share with us your comments, funny stories, tips, advice, strategies, creative ways to play, questions about how to play, problems with the directions or anything you want about Chess. All submissions will be reviewed within 24 hours.

me says:
two move checkmate
Mrs Eadon says:
can you explain how to get your opponent into checkmate in the least amount of goes? Thank you.
©2022 Board Game Capital - About Us