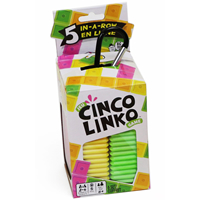 How To Play Cinco Linko (Instructions)

Talk about a quick game with a ton of fun packed in every game. Players attempt to get five tiles in a row (horizontal, vertical or diagonal) before their opponents do, to become the winner. Learning how to play takes literally a handful of seconds and game play averages between 5-10 minutes depending on who is playing.

Cinco Linko is a bright and colorful game that will sure catch a bystander's eye. It even comes with its own unique self-contained storage rack system that comes with a hook to attach it to just about anything. Cinco Linko is a must have in your gaming collection and is great for all the quick and easy game opportunities. Get your copy of Cinko Linko today. 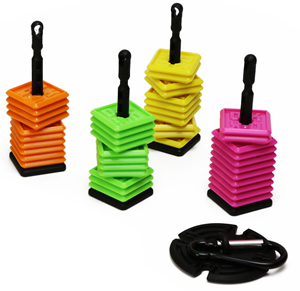 In the game Cinco Linko, players lay down tiles with at least one edge touching another tile in an attempt to get five tiles in a row. If you haven't won after all your tiles are placed you can move your tiles making sure all tiles remain with at least one edge touching. Done. See what we did there? We just explained a fun two to four player game in two sentences. Not a lot of games can claim that victory.

Cinco Linko was a game everyone enjoyed playing during our play tests. With four people you had help blocking others and our games ran about 10 minutes. With just two players, you had to be much more careful to watch all possible wins by your opponent and the game was much faster. This game is so simple, so easy to play and learn how to play, somewhat strategic and so colorful!

Something we thought was a bit of a marketing angle was the fact that you can carry this on the outside of your backpack. While, yes, you could do that, it makes us nervous with how easy the four decks could pop off once played a few times. We loved how compact it was and how it was all self-contained but we're not sure it could handle the abuse that we give to our backpacks. 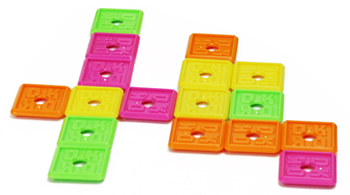 That aside, one thing that we found slightly annoying was the actual shape of the tiles. They look and feel great, but because they are tapered at the edges, it is really easy to push tiles up on each other and makes placing tiles a very delicate thing to do. If they were literally just square edged tiles, we feel like they would butt up against each other much better. Also, be sure to stack them all the same direction or they won't go back in the storage unit correctly and can't clip in.

Perhaps a little nit picky but we thought we'd throw it out there. Don't get us wrong, we loved the game and how fast and fun it is. We really liked the second "phase" where we began to move our already placed tiles. We even let some younger kids play (down to four years old) and while they were not very competitive at all, they understood how to play and had a blast playing. Great family game and one that will get used plenty in our game collection.

The game Cinco Linko should come with the following components. These are based off of the original game and don't include components from any expansion packs or different editions.

Be the first player to get five in a row and you win.

Please keep in mind that the official Cinco Linko rules and instructions could be different depending on the game version you have. The rules below are some of the exact directions that came in the original packaging and will teach you how to play Cinco Linko. Download these original PDF game rules or print them for later use.

Share with us your comments, funny stories, tips, advice, strategies, creative ways to play, questions about how to play, problems with the directions or anything you want about Cinco Linko. All submissions will be reviewed within 24 hours.

Bob Gray says:
After running out of tiles and are repositioning, are you allowed to pull a tile out of the middle?
©2023 Board Game Capital - About Us