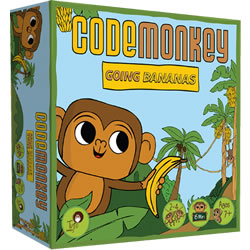 Get ready to swing through the trees, roll some dices, grab some bananas and code your monkey. This programing board game is a fun, yet challenging, approach to introduce simple coding techniques in a fun jungle board game. If your opponent screws up your path so you can't complete your code, your strategy will be messed up and you won't be able to move as planned. Can you successfully grab more monkeys that your opponents? If you can, you'll become the winning monkey.

CodeMonkey - Going Bananas has many different version of the game rules which lets you adapt to your playing style. You can make things harder by adding traps or loops, or you can keep things easier by playing the basic rules. Other challenges and twists can be added to make the game more interesting. Learning how to play will take a few minutes but once you get it and play your first game, you'll be begging to play again. Grab your friends and try this fun coding game today. Purchase your own copy of CodeMoneky - Going Bananas before they are all gone. 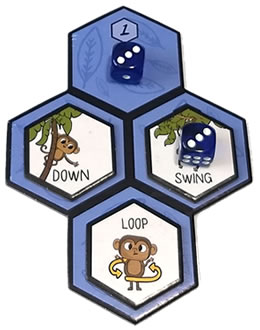 What a perfect name for a very challenging game to understand how to play. We don’t want to get this game review off on the wrong foot but wow, were we going bananas trying to understand this game! It took us over an hour of setup/reading the rules book to start playing very confused. After several more minutes of referencing the rules book, back and forth as we screwed up the first few rounds, we were off and playing. Once we finished the game we were so relieved to have it over – but we did understand it much more.

After our experience of reading the rule book, the game lost its fun the first time (we were really struggling). Now that we know how to play the most basic game version, subsequent games will be far more fun (more on that later). The rule book gave some helpful examples of plays and was worded in a very thorough manner – maybe we just got rapped around the axle trying to understand all the nomenclature. Somehow, the rules might be able to be rewritten in a more simple approach but we don’t know what that would look like. It was late when we played so maybe we were just brain dead from the day’s events.

That aside, we were impressed with the chess type feel of the game where you had to plan out you moves in advance. A couple times, we got blocked and had to change our strategy which at times turned out for the better. This is a thinking game that plays fairly simple but has a lot of possibilities and strategy. With the game board and trees changes each game, no two games will ever be the same. Plus, the amount of variations you can add to the game rules make this a never ending game of possibilities. The programming aspect was fun with the twist that you can’t change your code once it’s written. Clever.

We were impressed that you can dumb down the game for beginners or ramp it up for more complex players. We played the simple rules and had our hands full but could see the fun of the other tricks and twists. Having said that, the game box says it can be played by a seven year old. If you have a gifted/talented seven year old, then maybe they could play otherwise we feel this is more for ages 10 plus. 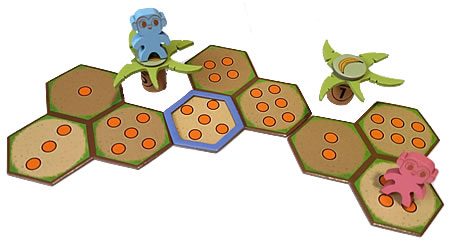 Going Bananas is a fun themed monkey game with a lot of pieces – like a lot! The setup looks cool and very unique from other games. When we received this game, several wooden trees and one monkey were broken. Not from shipping but from being shoved in a tiny box that barely fit everything. The trees are very fragile since the leaves get really thin in areas. Plus, with the bananas and monkeys on top of the trees during game play, you have to be really careful not to knock things over. Otherwise, the game is manufactured really nicely with thick cardboard pieces.

Overall it was a fun game after you get over the large hurdle of learning how to play. Simple math is used and can be a really entertaining and educational game for all kinds of audiences. Whether you want to play this game to the extreme or just play casually, you can modify the rules to however you like. This is a nicely put together game that is aimed to a more specific audience – those that like programming with a playful strategic twist.

The game CodeMonkey - Going Bananas should come with the following components. These are based off of the original game and don't include components from any expansion packs or different editions.

Swing or walk your way around the jungle grabbing as many bananas as you can. If you are the player with the most bananas when they are all gone then you'll win.

Share with us your comments, funny stories, tips, advice, strategies, creative ways to play, questions about how to play, problems with the directions or anything you want about CodeMonkey - Going Bananas. All submissions will be reviewed within 24 hours.