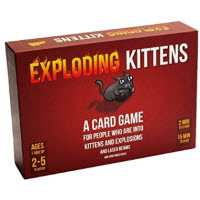 How To Play Exploding Kittens (Instructions)

Exploding Kittens??? Really, that is the name of the game? That is just a peak into how crazy and fun this game is. Odd things like exploding kittens, laser beams and diffusers are all part of this far-out card game.

The strategy behind Exploding Kittens is quite immense yet the game play is fun enough that it is a dark and mystical card game. The game rules themselves even advise to not read them but to check out videos on how to play this game. Keep the game rules close by though incase you have a quick question or heaven forbid you don't have a internet connection. Give Exploding Kittens a try.

The game Exploding Kittens should come with the following components. These are based off of the original game and don't include components from any expansion packs or different editions.

Last player standing that hasn't been exploded will win the game.

Please keep in mind that the official Exploding Kittens rules and instructions could be different depending on the game version you have. The rules below are some of the exact directions that came in the original packaging and will teach you how to play Exploding Kittens. Download these original PDF game rules or print them for later use.

Share with us your comments, funny stories, tips, advice, strategies, creative ways to play, questions about how to play, problems with the directions or anything you want about Exploding Kittens. All submissions will be reviewed within 24 hours.

Ed says:
Do the game rules have different variations to play? I don't remember seeing any but wanted to check.
Luis says:
I just saw there is an expansion pack for this game called imploding kittens. Lol, this game is out of control! I love it.
Adriana says:
I laughed so hard when I saw the title and picture on this game. I had to pick it up. I glanced through the rules and this sounds hilarious. I like strategy type games but this one sounds goofy enough to get anyone to play.
Brenda says:
I picked this up when it first came out, well before on presale, and it has been our favorite game for a while. Some of these cards are so random it always makes us laugh.
©2022 Board Game Capital - About Us