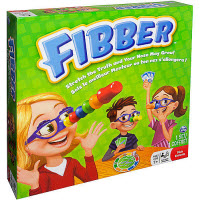 How To Play Fibber (Instructions)

Similar to other lying or fibbing games, Fibber puts a creative twist on it by actually making your nose grow with every fib. Players wear eye glasses that have noses attached to them. If you have the shortest nose at the end of the game then you'll be the winner.

Learning how to play Fibber is actually quite easy. The directions are very straight forward with some helpful examples. Only being able to play with 3-4 people limits the possibility some but is overall a fun game to play.

The game Fibber should come with the following components. These are based off of the original game and don't include components from any expansion packs or different editions.

If you find yourself with the shortest nose after all the other noses have been take then you will be the Fibber winner.

Please keep in mind that the official Fibber rules and instructions could be different depending on the game version you have. The rules below are some of the exact directions that came in the original packaging and will teach you how to play Fibber. Download these original PDF game rules or print them for later use.

Share with us your comments, funny stories, tips, advice, strategies, creative ways to play, questions about how to play, problems with the directions or anything you want about Fibber. All submissions will be reviewed within 24 hours.

Nichole says:
I love this game fibber Me NAD my brothers and sister too.
Abri says:
I enjoyed the game very much after playing it
Wendy says:
I saw this at the store and had to pick this game up. It's a lot of fun. Found this site trying to find the rules to a different game. Just thought I'd put in a recommendation for this game - wet like it.
Tom says:
My grandkids like this game and how your nose actually grows. They don't get the reference to Pinocchio since they're too young - they just think it's funny. Hopefully it doesn't teach them that fibbing is ok.
©2023 Board Game Capital - About Us