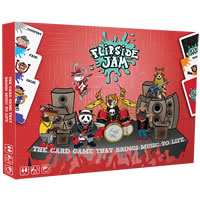 How To Play Flipside Jam (Instructions)

Get ready for a fast-paced game where players pick, flip and pass their cards in an attempt to score the best matches, gaining them the most points. Fun twists and spins are included with some extra challenges and beware of the destroy card. Can you make the best band, earn the most sales, get the most fans and be awarded the song award?

Flipside Jam is a great casual card game that is quickly learned and played. Fun for all ages and is perfect for an exciting game night. Add something new to your game collection and bring Flipside Jam to your next party. Everyone will be sure to have a blast with the card game Flipside Jam. 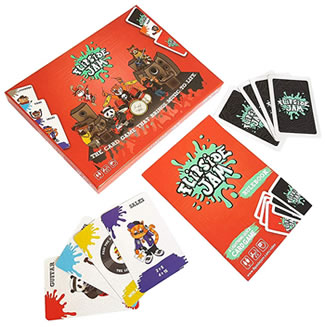 Get ready...flip...jam! We're really excited about Flipside Jam. It is an extremely fun and addicting card game that is so easy to learn and to play. We've said it before but simple, easy games that are this fun have a sweet spot with us. We played with all five people allowed to play and it was a blast...or should I say, we jammed out!

Flipside Jam comes in a larger box for a card game with four decks laying next to each other neatly divided by cardboard walls. We struggled a bit to open the tight fitting lid but when we found the impressive packing/organization grid inside we understood why the box was shaped like it was. This game could have been in a standard card deck box but the box they chose added some class and style - we like it.

Two thumbs up for the instruction booklet. It's 100% professionally done. Rules are easy to understand and pictures aid the players. In fact, pictures might actually take up more space than words. Well done on the rule book! There is also a link to where you can watch a 2 minute video that explains the game very well.

The only ding we can give this game (and we're digging deep here), is that a notepad and pencil aren't included to keep score. This would have been a nice extra touch but understand that the price would increase also. With a storage box this size it would have easily fit. Definitely not a deal breaker and perhaps only a suggestion. Getting your own paper is easy enough.

Playing was a blast. The element of trying to get a group with the maximum cards vs keeping other cards was always a battle. The element of surprise as you flipped the cards over was a nice little touch. At first we were confused what the point of it was but then quickly realized this is a must to keep strategy even across the players. Destroy cards are an awesome addition to the game. We also really like the extra bonus of the Song and Award cards as well as having the most fan cards. Extra points if you're willing to take the risk.

Flipside Jam is a well thought out, simple and addicting game that only takes minutes to play. All play testers had positive things to say and loved playing. The cute and fun graphics on each card as well as the nicely chosen colors make this a group favorite and total hit for your next casual game night.

Be the player with the most points after three rounds to win.

Please keep in mind that the official Flipside Jam rules and instructions could be different depending on the game version you have. The rules below are some of the exact directions that came in the original packaging. Download these original PDF rules or print them for later use.

Share with us your comments, funny stories, tips, advice, strategies, creative ways to play, questions about how to play, problems with the directions or anything you want about Flipside Jam. All submissions will be reviewed within 24 hours.