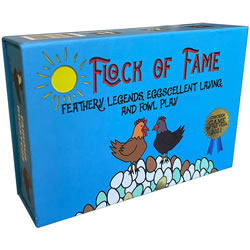 How To Play Flock Of Fame (Instructions)

If you're feeling cooped up then why not create your own pretend coop of chickens? But not just any chickens, how about your own flock of famous chickens? In this fast paced, hilarious card game, you'll be tasked to form cliques of similar chickens, protect them from disease and predators, deal with climate change, attempt to earn free range eggs and pair hens with roosters. If you love chickens - you'll love this crazy card game themed all about them.

Flock Of Fame was created for families with the sole purpose to have fun. There are twists and turns, strategy and cliff hangers since the game isn't over until it's over. The game is even environmentally conscience and uses eco-friendly paper, inks and wrappings. They even plan to donate a portion of the proceeds to areas in need of sustainable chickens. So what are you waiting for - to fly the coop? Grab your own copy of Flock Of Fame today so you can create the greatest flock of chickens ever. 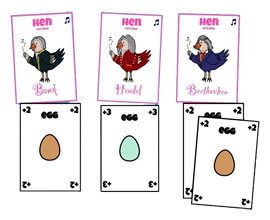 Flock of Fame or Flock of Shame? We’ll get to our complaints about this game that we had such high hopes for later. We’ll try to touch on a few of the highlights before we give our disappointed opinion. We try to stay positive and give games the best reviews we can but this one we’ll have a hard time with.

First the good. The game box was one of the short lived highlights of the game for us. It is a sturdy box with a top flap lid. It stays shut with an embedded magnet. While it looks and feels great, we turned the box over and gave it a slight jerk and the lid opened with the eggs, roosters, hens and all the other cards flying out. The box was good at first but seemed to fail at its only job. Maybe use a rubber band around your box so you don’t loose any cards?

The theme of the card game is chickens and it did a good job keeping that theme all the way through. We liked how almost every aspect of chickens was included in the game. The art work is very, very simple. Almost too much so, but if you like a minimalist look, this game is up your ally. The rule book was written pretty well and we found ourselves referencing it a lot since the descriptions on the cards were vague enough that we didn’t understand them at first. Even at that, we had to guess at a few things during game play.

The cards are barely a descent quality of material. While they claim ecofriendly materials were used, it gives the game a cheep feel. They also claim proceeds from the game will go to purchase chickens for those in need – which we thought was very cool.

Lastly, all the puns were funny and cute but for us we were lost in the utter confusion from the pointlessness of the game that we completely missed the humor. We are not hardcore gamers. We really wanted to have fun. We were in shock the entire game. Let us explain why.

Eggs earned are never lost (except for two from rats). What? So in a game of two players, we each had about half the eggs in the game. We also had about 15 hens each and the entire table was full of randomly placed eggs (zero strategy on where to put your eggs). There was no point to any of this! The action cards made things slightly more engaging but they did such little to no damage that they were almost worthless to use. The big hitter disasters also had little to no effect on the game. At one point a player lost all 10 of their hens – this basically did nothing since after two turns they were back to laying all the cards they could have anyway from their hand. Going for cliques was a slight challenge and was really the only thing you could fight over. Perhaps larger groups of players helps this game take off. Two player games are just dumb.

We felt like if the rules were changed with only one modification – that once a hen was taken all the eggs go with it, then you would start to strategize where to place your eggs. Also, the amount of eggs laid by each hen would be important if lets say, the hen had to lay at least 10 points worth of eggs before they could even count toward your score. Now we have a game! That’s how we’ll start playing it from now on and there will be a purpose to this madness and a fun lighthearted point to the game. Did we completely miss something in the rules?

Please keep in mind that the official Flock Of Fame rules and instructions could be different depending on the game version you have. The rules below are some of the exact directions that came in the original packaging.

Share with us your comments, funny stories, tips, advice, strategies, creative ways to play, questions about how to play, problems with the directions or anything you want about Flock Of Fame. All submissions will be reviewed within 24 hours.