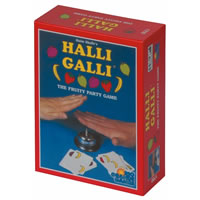 How To Play Halli Galli (Instructions)

Halli Galli is a fast paced card game that is great for families of all ages. The player with the most cards at the end of the game will become the Halli Galli champion. Check out Halli Galli for a great party game to play with the entire family. Play Halli Galli today.

The game Halli Galli should come with the following components. These are based off of the original game and don't include components from any expansion packs or different editions.

Please keep in mind that the official Halli Galli rules and instructions could be different depending on the game version you have. The rules below are some of the exact directions that came in the original packaging and will teach you how to play Halli Galli. Download these original PDF game rules or print them for later use.

Share with us your comments, funny stories, tips, advice, strategies, creative ways to play, questions about how to play, problems with the directions or anything you want about Halli Galli. All submissions will be reviewed within 24 hours.

Jo says:
If you've showed a new card that added up to the strawberries and made it 8 (any number in excess of 5) in total then you lose if you rang the bell. Regardless if unconsciously (that makes it fun) because you are used to turning up cards (and has to be quick) making it counting difficult :)
Tumin says:
I was playing game with my bro(2players). I saw the 5 strawberryies card that my bro submit so i hit the bell. Here is the problem. When i ht the bell i also submit my card unconsiously and that was 3 strawberries.when i learned game first time, in this case, i took cards and i put the card that i showed on the bottom. But my bro said it was 8 strawberries and i have to give one mistake card to him. How can we solve this situation?
©2022 Board Game Capital - About Us