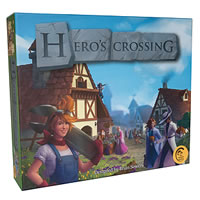 How To Play Hero's Crossing (Instructions)

Remember the first gaming consoles from years ago and how pixelated they were? Now you get to play a real life RPG board game that mimics those kinds of games. You'll become the mayor of an RPG town. Hero's Crossing is a strategy board game where you run your own town. You'll build shops, produce items and sell to heroes.

Hero's Crossing is a fun village building game where there won't be a shortage of things to do. How well can you build your town, correctly manage your resources and help your heroes? Learn more about Hero's Crossing and grab your copy today. 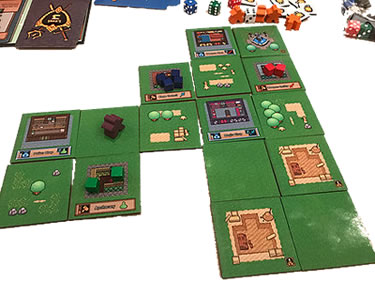 Cue the old 8-bit video game music. Hero's Crossing is an 8-bit RPG video game on your table that you get to play in real life. You'd never know this by looking at the beautiful art work on the front cover of the box. In fact, when we opened the box, we were very confused. Seeing the great looking box art then finding very pixilated cards and gaming components was kind of a let down. We wonder why the box art doesn't match the rest of the game...Putting that aside, once you understand the premise of the game, it makes much more sense.

If you're not much into RPG style board/card games you might be turned off by this game initially. Some of us aren't big RPG fans but after a game and a slight headache learning how to play, it was actually quite fun. There are a few things that you'll need to learn and understand before you play the game and we felt the rule book was well written. Plenty of examples were given and the images helped all throughout the instructions. Our version of the game had an extra sheet for the solo-play instructions. Not sure if this was an afterthought or what but it would have been nice to be in the rule book. 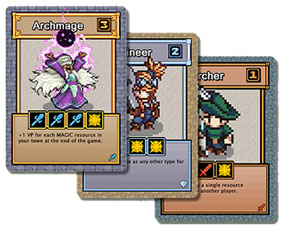 After a few nit-picky things we thought were strange, Hero's Crossing is growing on us the more we think about it and play it. The quality of the game components is very good. Even the little meeples are cut with very small pixilated edges which we thought was really neat! Everything is small - the dice, the tiles, the meeples. This makes sense because once the game is about half way through you realize how much space is needed for all the towns around you. The game looks really cool when everything is setup and in play. There are things everywhere!

Game play is really fun. It isn't so much a fight each other to steal or gain points type of game. There is a bit of interaction between other players (that darn spy) but mostly each player is worrying about their own village. The aspects of bidding, attracting, moving and producing, to name a few, really make it feel like a real town. There is a fair amount of waiting until your next turn but it gives you some time to plan your next move. Also, the fact that you can play this by yourself is an added bonus.

Hero's Crossing is a great game that might be for the 25-45 year old crowd. Everyone younger than that might get annoyed with the pixilated graphics since they weren't raised on these types of video games. Anyone older than that might not understand the fun of an arcade style RPG game played out in real life.

The game Hero's Crossing should come with the following components. These are based off of the original game and don't include components from any expansion packs or different editions.

The player with the most Victory Points wins the game.

Please keep in mind that the official Hero's Crossing rules and instructions could be different depending on the game version you have. The rules below are some of the exact directions that came in the original packaging and will teach you how to play Hero's Crossing. Download these original PDF game rules or print them for later use.

Share with us your comments, funny stories, tips, advice, strategies, creative ways to play, questions about how to play, problems with the directions or anything you want about Hero's Crossing. All submissions will be reviewed within 24 hours.