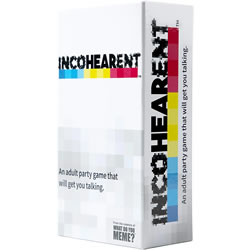 How To Play Incohearent (Instructions) 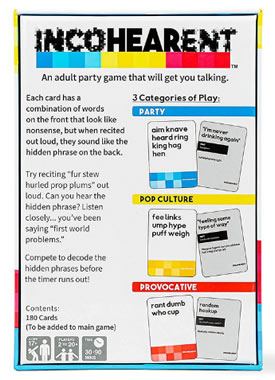 Have you ever heard someone say something strange that they didn't actually say? Sometimes our minds play tricks on ourselves and we come up with own own phrase that we thought we heard. Well, how about decoding a bunch of phrases into things that people definitely did't say but they sure sounded like it? Let's take the words "mocks suck curb berk." Say it a few times slow and a few times fast. What do you hear? Is it a very famous person that created one of the biggest social media platforms of all time?

Incohearent is a hilarious party game where you'll say some pretty dumb things that others will hear as perfectly normal phrases. As the person reading the clue, you'll be focused on the words and pronunciation so hearing what you're supposed to hear is much harder. Sometimes if you just "casually" listen and try not to hear the whole thing you'll do better. Incohearent is a spin off of What Do You Meme? but is tailored around adult players. For this reason the game is recommended for ages 17 and older. This game won't take long to play and learning how to play Incohearent is a breeze. Grab your copy of Incohearent and you'll have a blast at your next adults party game.

The game Incohearent should come with the following components. These are based off of the original game and don't include components from any expansion packs or different editions.

If you are playing in a smaller group, then the first player to win 13 cards by decoding them will win. If you are playing in a large group, this will take some time. So, instead of waiting for a player to win 13 cards, you'll decide which team won by rounds. Three rounds will be played as teams and at the end of the third round, the team with the most decoded cards will be crowned the champions of Incohearent.

Perparation: There are three different categories of cards that you can choose from. The blue cards are party topics, the yellow cards are pop culture topics and the pink cards are kinky topics. 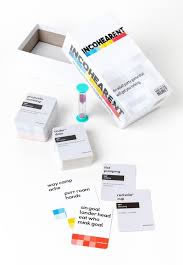 Place only the category cards you want in the box or shuffle them all together to get the most variety. Once the cards you want are mixed up, you can begin the game.

If a small amount of people are playing (probably less than 4-5 players) then everyone is playing for themselves. If a larger group of players are playing (like 5 or more players), it is best to divide into groups and play as teams. You can split up into however many groups as makes sense. Up to about 20 people can play this way so this makes a great party game. Place the 60 second timer close by on a hard surface that everyone can see. Quickly brief everyone on the official Incohearent game rules so there are no arguments on how to play. Once everyone knows how to play Incohearent the right way, the game begins.

Game Play: One player, called the judge, will flip over the first card and hold it up so everyone can see it.

The judge will also flip over the timer and gets the game started. Everyone will read the card out loud if playing as individuals or each team will take turns reading the cards out loud. Whoever is successful in decoding the mixed up words into a common phrase, name, thing or place, they will win that card. The judge will decide who said it correctly and who was the first player to say it. Players can win up to three cards in the 60 second time window. Once the timer runs out, the next player/team is up. 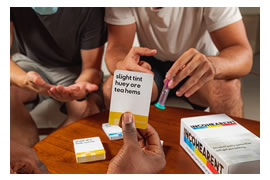 If you get stumped and no one can figure out what they are supposed to be saying, there is a hint on the back of the card that the judge is allowed to say. Be careful, you'll only get one hint per 60 seconds so use it wisely. If you are still stumped, you are allowed to pass and a new card will be reveled. Sometimes is helps to look away and only listen to what is being said so your eyes don't block your brain from hearing what you are suppose to hear. 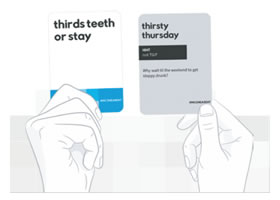 The round ends when the timer runs out or when someone/team has decoded three cards. Rotating counterclockwise, the next team or player will become the judge and the next round begins. The official Incohearent rules state that only three rounds are played with teams but you can change this if you want a longer or shorter game. You can also adjust the amount of decoded cards needed to win the game individually. 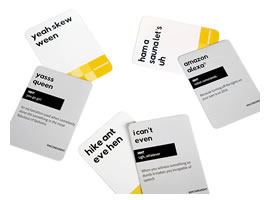 What happens if there is a tie between two teams? Well, if there is a tie between two teams, then the sudden death match begins. One person is selected from each team in the tie. The next person in line becomes the judge and a card is flipped over. The first player to recognize and successfully decode the card out loud will break the tie and win Incohearent for their team. Celebrate how you'd like because you deserve it! This mixed up game of crazy words isn't the easiest to play at times, but it is a blast to play with friends and family.

Please keep in mind that the official Incohearent rules and instructions could be different depending on the game version you have. The rules below are some of the exact directions that came in the original packaging and will teach you how to play Incohearent. Download these original PDF game rules or print them for later use.

Share with us your comments, funny stories, tips, advice, strategies, creative ways to play, questions about how to play, problems with the directions or anything you want about Incohearent. All submissions will be reviewed within 24 hours.

Jax says:
This game gets me every time. I get so stuck on the words being read that I can't hear what I'm supposed to hear. Having an adult version is kind of fun and sparks a lot of funny conversation. It's a great party game that gets everyone involved.
©2022 Board Game Capital - About Us