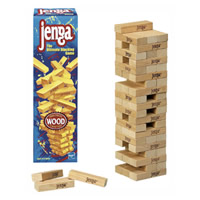 How To Play Jenga (Instructions)

So you think you have a steady hand? Try playing Jenga! Jenga is a game of eye-hand coordination and balance. The tower is built and then carefully deconstructed without the tower toppling over. As the tower grows higher it become more and more unstable. The winner of Jenga is the last person to remove and then place the block on top of the tower without knocking it over.

With only 54 wooden blocks, this game is simple and loads of fun for all ages.

The object of Jenga is to remove one block at a time from the Jenga tower and then stack it on top. The last player to stack a block without making the tower fall wins the game.

Please keep in mind that the official Jenga rules and instructions could be different depending on the game version you have. The rules below are some of the exact directions that came in the original packaging.

Share with us your comments, funny stories, tips, advice, strategies, creative ways to play, questions about how to play, problems with the directions or anything you want about Jenga. All submissions will be reviewed within 24 hours.


Chan Anthony says:
Can Jenga end with a draw or a tie?
Clement says:
It's a good game to break the ice of new group/friends. Even the shy or timid ones couldn't help screaming in excitement.
Ben says:
What is the highest layer I can take a block from
manal says:
if a layer is over and we have to start a new layer can we take a block from the topmost layer
Benjamin says:
Can I touch a piece n see that I can't move it a decide to try another piece to take out
Gary says:
Am I allowed to try to push a block out,then seeing it WILL NOT go out or back in, without me knocking the tower over, but it is half way out. can I just leave that block alone, sticking half way out and move onto another??
Samuel says:
If you take out more than one peace on purpose and put them both in top is it against the rule?
Judy says:
Can you reconstruct blocks? Not at the beginning, but after a while.
Paul M says:
You can get higher stacks by ignoring the rule that you are not allowed to shift other blocks. Using one hand, you can redistribute the weight by shifting the stack around.
Alan Valdez says:
I really enjoy to play this game with my friends, but I don´t know if you can tell me things to get a better play. I hope you enjoy this game.
Jenn says:
I love this game, my 4 year old daughter really loves it! She loves to yell "Jenga!!" when the tower falls! She is getting better at every game at grabbing the pieces. My 2 1/2 year old loves to get the pieces and build things with them! My husband and I love to play it!
Huge List Of
Free Board Game
Giveaways!