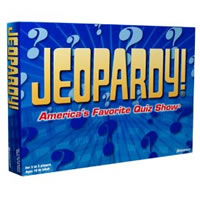 How To Play Jeopardy (Instructions)

Put your brain power to the test with Jeopardy the board game. This game mimics the TV trivia game show and even includes contestant clickers. Play Jeopardy with your friends and choose from categories such as Sports, Pop, Stars, Holidays, Sitcoms, Music, etc. Don't forget about double and final Jeopardy as they are included in the game.

Jeopardy puts a twist on most average trivia games since instead of searching for the answer, you answer with the question! Check out the game Jeopardy and play it with your friends and family today!

The game Jeopardy should come with the following components. These are based off of the original game and don't include components from any expansion packs or different editions.

Ask the correct questions and accumulate the most money after three rounds of play: "Jeopardy!", "Double Jeopardy!", and "Final Jeopardy!".

Please keep in mind that the official Jeopardy rules and instructions could be different depending on the game version you have. The rules below are some of the exact directions that came in the original packaging and will teach you how to play Jeopardy. Download these original PDF game rules or print them for later use.

Share with us your comments, funny stories, tips, advice, strategies, creative ways to play, questions about how to play, problems with the directions or anything you want about Jeopardy. All submissions will be reviewed within 24 hours.

Madeline White says:
I don't like the fact that a person can win in final jeopardy and not give the complete name for the answer and another person loses who gives the complete answer. It doesn't seem fair. Is this the way the game started at its beginning? Enlighten me please.
MIKE says:
ALEX DID A GREAT JOB CALMING THE KID DOWN SO THE KID COULD GET OUT OF THE HOLE AND PLAY FINAL JEOPARDY TODAY. LONG TIME FAN
©2023 Board Game Capital - About Us