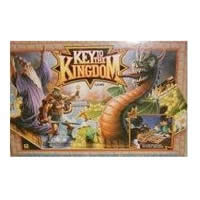 Key to the Kingdom Game Rules

How To Play Key to the Kingdom (Instructions)

How brave are you? Find out in the board game Key to the Kingdom. While playing you'll be traveling down a dangerous path with only a few well-guarded weapons to help you. Feeling brave yet? Try taking a step into the Magic Whirlpool. Once you do, the game will never be the same.

When you venture into the Magic Whirlpool, the game board unfolds and becomes a whole new land of guarded secrets and hidden perils. Key to the Kingdom is full of suspense and thrills as you search the board for the key and other treasures. The first player to escape from the kingdom with the key and one other treasure wins the game. Check out Key to the Kingdom for a fun game of suspense and thrills.

Your goal in Key to the Kingdom is to be the first Adventurer to escape from the Kingdom with the Key and one other Treasure.

Please keep in mind that the official Key to the Kingdom rules and instructions could be different depending on the game version you have. The rules below are some of the exact directions that came in the original packaging.

Share with us your comments, funny stories, tips, advice, strategies, creative ways to play, questions about how to play, problems with the directions or anything you want about Key to the Kingdom. All submissions will be reviewed within 24 hours.


Steve says:
Restoration games is re-releasing it at some point this year. simon, you spelled spectre wrong
terry says:
anyone have a image of the hellhound monster card, only card im missing thank you
Dan Valls says:
I just wanted to say thanks to the legend that posted the instructions. Lost my instruction manual a long time ago.
Kent says:
One question, for anyone familiar with the rules of this game..... please tell me.. the treasure cards; are you supposed show everybody what treasures you gain, or are they supposed to remain secret to anyone but the one who gets it? I ask only because the rulebook doesn't state anything in particular about that.
Katy harris says:
Just loved this game as a kid, it was my level of excitement. Needs rereleasing by someone!
emily digh says:
yeah the games good although it could do with a bit more of a base
nikki douglas says:
Have just watch the video of this fab game. Wow! I remember I used to play it to death all the time when I was a kid, it was just awesome as I recall. For a first adventure game it was unbeatable. Long may it sell. Agree with comments it should be re-released so my kids can play it too.
The Dark Archer says:
You little wimps. Come on into my domain and try taking me on if you think you're hard enough! WHEN are we going to see this classic re-released!
james Clare says:
Why do we have to buy second hand examples of Key to the Kingdom at ridiculous high prices! Surely there's a games company out there willing to bring it back, it would sell by the shed load; come on someone, lets see it back in production, it's the best adventure game ever!!
simon ellis says:
Possibly the coolest game ever invented. It may be an oldie but it's a true classic. Still got mine from the 90's and still we play it. Someone should make a computer version. Avoid the Voodoo Spectre!
sam tyler says:
The Best game ever! Avoid the bone pit at all cost!
Huge List Of
Free Board Game
Giveaways!