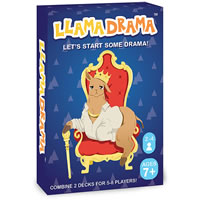 How To Play Llama Drama (Instructions)

No body wants drama with their llamas but in this fun card game, you might find just that. Players race to get rid of all their cards before their opponents in hopes of becoming the winner. You'll find some drama on the way though with some special cards and fun game rules.

Llama Drama is a great card game for kids ages seven and up and for adults as well. It is a fairly easy game to learn how to play and won't take more than a half hour to play. Have fun with this cute llama card game and grab your copy today. 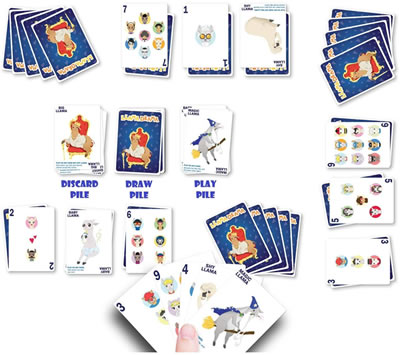 Ok, not to set this review off on a bad foot, but this game seems VERY familiar with a couple other games we have reviewed recently. Almost to the point where it's a cut and paste with different graphics. If you love llamas and like this kind of game then great! We'll try to say as much as we can about this game but a lot of it will be repeats from what we have said during our reviews of the games 3Up 3Down and Dig Dig.

Llama Drama, like other games of this nature, kind of feels like a mix between Uno, Scum and Phase 10 (or phase 3 in this case). There are familiar game mechanics so there isn't anything super new here. They use the three cards down, three cards up and cards in your hand tactic. We have mixed feelings about this. Seems like whatever happens prior to entering your last six cards is kind of useless and doesn't gain you much. You are ultimately left with the luck of whatever those last three cards are. It does make for a fun and interesting finish though. 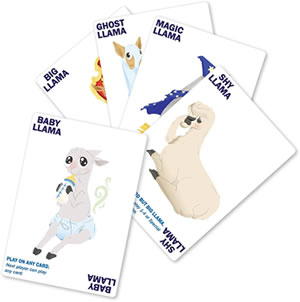 The game uses some fun artwork (though simple and kind of sparse) and has five special cards: Big Llama, Baby Llama, Ghost Llama, Magic Llama and Shy Llama. They have special abilities that let you use most of them like a wild. The Llamas are fun and cute. We did really like that the quick rules for each of these special cards were right on the card itself. This made it so if you collected one of these cards you could read how to play it in your hand without referencing the game rules. The game rules are listed on two double sided cards in the deck - this worked great.

While this isn't the most original game out there (aside from it's art work) and the quality is sufficient for the low purchase price, it is still a simple and carefree card game. They even have a holiday version with llamas dressed in Christmas outfits. Yay for holiday specific card games. We liked playing Llama Drama and feel like most will too.

The game Llama Drama should come with the following components. These are based off of the original game and don't include components from any expansion packs or different editions.

Get rid of all your cards first and you'll win.

Please keep in mind that the official Llama Drama rules and instructions could be different depending on the game version you have. The rules below are some of the exact directions that came in the original packaging and will teach you how to play Llama Drama. Download these original PDF game rules or print them for later use.

Share with us your comments, funny stories, tips, advice, strategies, creative ways to play, questions about how to play, problems with the directions or anything you want about Llama Drama. All submissions will be reviewed within 24 hours.