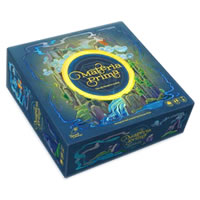 How To Play Materia Prima (Instructions)

Step back in time to a medieval world where mysticism and science are inseparable in alchemy. Players attempt to search for the philosopher's stone while traveling throughout the towns. Dice rolling while fighting, deck building while recipe exploration, grid movement on a modular game board and picking up and delivering while resource mining are just a few things you'll be involved in.

Materia Prima is a board game unlike any you have played before. Taking over an hour to play, this game will keep you and up to three other players busy and entertained as you explore this new world. Learning how to play will take a few minutes as you read through the rulebook. Learn more about Materia Prima to see if it's for you. If it is, you'll definitely enjoy having it in your game collection for years to come. 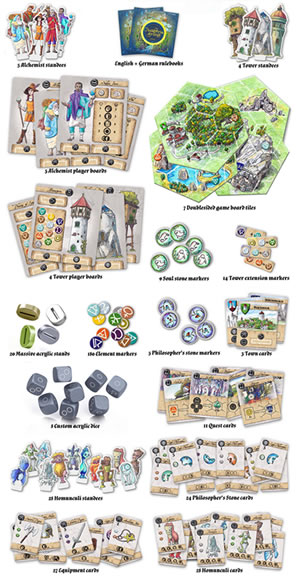 Need a relaxing new game where there is never a shortage of things to do and the suspense builds up until the end of the game when points are totaled and the winner is announced? Want a game that plays very different every time you play and will immerse you in a calming, hand drawn world of Alchemists and homunculi? Would you like a board game that is a step above your average big box store games that will challenge and engage you throughout the entire gaming experience? Drum roll...then Materia Prima is for you.

Materia Prima is a very interesting tile board game with a lot of components. Luckily, these components are very well built, nicely organized and wonderfully created with a unique matching theme. You'll even get a nice little fabric draw string bag for all your element markers. The review copy we received had a generic handmade box but after snooping around on the game creator's website, a nice compartmentalized storage box might be in the works. That would complete this game very well and set it far above others.

We were mesmerized by the wonderful, unique and detailed artwork through every piece of this game. The homunculi are adorable, the game rules are impressively put together, the shapes of the pieces are fun and the 3D nature of the game board playing pieces adds to an exciting game experience.

While the game rules look intimidating, playing isn't very complicated although it isn't for casual gamers or those that want to play a quick game. If you're into this style of game both in game mechanics and theme, you'll really enjoy this game. You'll always have options and things to do so there isn't very much downtime between turns. This keeps the game flowing. Replaying this game will result in a completely different challenge with a totally new experience. 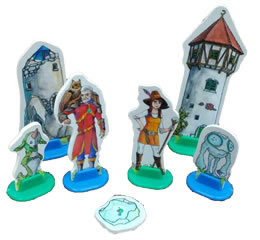 We were pretty impressed with the detail and completeness in this game. It wasn't just thrown together and you can sense the love the creators had for it when designing it. Exploring the game board, attempting to create the philosopher's stone, secret quests, collecting and using elements, mining, fighting, upgrading towers, researching recipes...the list goes on an on. Be sure to brush up on the point system on how the winner will be determined. We kind of forgot until the end of the game and were somewhat surprised by how many points each player had. We really enjoyed playing this game. Be sure to set aside some decent time to play Materia Prima so you can get the full experience. You'll be glad you did.

The game Materia Prima should come with the following components. These are based off of the original game and don't include components from any expansion packs or different editions.

The winner is the player who received the most wisdom value after counting the points.

Please keep in mind that the official Materia Prima rules and instructions could be different depending on the game version you have. The rules below are some of the exact directions that came in the original packaging and will teach you how to play Materia Prima. Download these original PDF game rules or print them for later use.

Share with us your comments, funny stories, tips, advice, strategies, creative ways to play, questions about how to play, problems with the directions or anything you want about Materia Prima. All submissions will be reviewed within 24 hours.