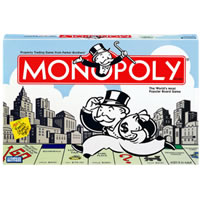 How To Play Monopoly (Instructions)

Monopoly has one of the longest and most successful board game history ever. It has made it's way to the most popular game in the world! This game was released during the height of the Great Depression by Mr. Monopoly himself. With it's appeal to become a "Monopoly Millionaire" owning all property, houses and hotels it quickly grew in popularity.

Financial success by trading, buying properties and houses, taking chances with "Chance" and "Community Chest", and always a little luck from the dice are the key and strategy to this exciting board game.

The game Monopoly should come with the following components. These are based off of the original game and don't include components from any expansion packs or different editions.

By selling, buying, renting, negotiating property, and with a little luck from the dice, your goal is to become the wealthiest player on the board.

Game Play: The official monopoly board game rules states that starting with the banker, each player takes turns tossing the dice. The highest rolling player begins and game play continues to his left. Rolling doubles results in another turn. Three doubles in a row will take you immediately to Jail. Each time a player passes "GO" he/she receives $200 from the banker.

Rules of buying property are if you land on an unowned space, the player may buy it at the shown price. If you do not want to buy the property, the banker holds an auction and the highest bidder wins. The deed is then given to it's owner. Rent is charged and collected by the owner to anyone who lands on that property as listed per deed. If all deed of the same color are owned, double is charged (with no houses or hotels). If property is mortgaged, no rent is collected nor double rent (if applies) can be charged. Houses can be purchased if a monopoly of same colored properties are owned by the same player. Houses must be built evenly on all 3 or 2 deeds and hotels can be bought after four houses have been built. One hotel takes the place of 4 houses. Deeds give instructions on house and hotel costs. Selling either of which after purchased will only result in half of what was given. Sorry, those are the rules! Unimproved properties may be mortgaged at any time to the bank. Paying mortgaged property back results in a 10% added interest on mortgage price.

When a player lands on a Chance or Community Chest space, the top card is taken, obeyed, and placed at the bottom of the pile. "Get out of Jail" cards can be kept or sold until used. Contrary to many "invented" rules or instructions, Free Parking is only a resting place where no money is awarded.

Jail rules are such that one must be sent there by a card, rolling 3 doubles or by landing on the "Go to Jail" space. Player cannot collect $200 and their turn ends. The Monopoly player has 2 options, roll dice to get out of jail with doubles or pay $50. If three turns go by and player is still in jail, he/she must pay $50 and is released playing the number rolled on the dice. While in jail, one can still buy/sell houses or hotels and collect rent.

When a player fails to be able to pay off debts to the bank or other players, he declares bankruptcy and is out of the game.

Please keep in mind that the official Monopoly rules and instructions could be different depending on the game version you have. The rules below are some of the exact directions that came in the original packaging and will teach you how to play Monopoly. Download these original PDF game rules or print them for later use.

Share with us your comments, funny stories, tips, advice, strategies, creative ways to play, questions about how to play, problems with the directions or anything you want about Monopoly. All submissions will be reviewed within 24 hours.