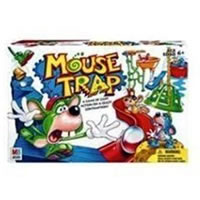 How To Play Mouse Trap (Instructions)

Mouse Trap is a unique, interactive game where the object is to build a trap bit by bit while avoiding being the one caught. This is definitely no ordinary mouse trap; one thing leads to another as levers are pushed, balls start rolling, things are tipped and much more.

This fun and colorful game will capture the attention of smaller and bigger kids for hours as you try to catch your opponent's mice. Each time you play the game it brings on a new fun challenge. Check out this board game and play Mouse Trap today!

The game Mouse Trap should come with the following components. These are based off of the original game and don't include components from any expansion packs or different editions.

Be the last uncaptured mouse on the game board and win.

Please keep in mind that the official Mouse Trap rules and instructions could be different depending on the game version you have. The rules below are some of the exact directions that came in the original packaging and will teach you how to play Mouse Trap. Download these original PDF game rules or print them for later use.

Share with us your comments, funny stories, tips, advice, strategies, creative ways to play, questions about how to play, problems with the directions or anything you want about Mouse Trap. All submissions will be reviewed within 24 hours.

Cheryl says:
I need the Rules for the "Elefun & Friends Mouse Trap" game.
Amy says:
Does anybody know how to fit this game neatly back in the box?
Gene says:
For those of you looking for replacement rubber bands, just measure the distance between the two points where the rubber band goes when they are as close together as they'll get, then use a rubber band that is just slightly smaller. Simple!
chelsea says:
how do i play? i bought mouse trap at a garage sale and it did not have the instuctions
Ashley says:
Is the start piece count as a space when you go all way around or do you skip it and count next space?
Ruthlee says:
Looking for size of rubberband. Kids lost! Thanks
Nolan says:
The new mousetrap what a waste of time. spaces to small. The whole family losing temper playing it.
Eric says:
I recently purchased a 1970's Mouse Trap Game at an estate sale which did not include instructions. According to Wikipedia cheese pieces were introduced in an update in the 1970's to make the game more challenging. Would be interested if anyone had instructions for the early version of the game.
LadyWolf says:
To download a set of instructions, click the link above, "Official Mousetrap Game Rules"
Trae Bramlett says:
Any size rubber band will work. If it is too big just make a little loop around either one or both spots that the rubber band attaches to. Same thing happened to me.
Olivia says:
This game is fun but I don't understand
Judy says:
What size rubber band? Our game is old and band has broken.
Allison says:
This game seems really fun, but I've lost the instructions and tried looking them up on Google, but this website doesn't tell you anything.
Debbie says:
My kids lost the rubberband to the game. What size rubberband do I need?
©2023 Board Game Capital - About Us