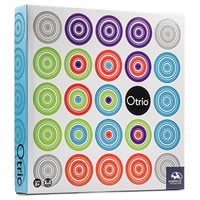 How To Play Otrio (Instructions)

Modern board games can get quite complicated and cluttered at times and even distract from the game itself. Not Otrio. This game brings it all back to a simple wooden game board with different size ring game pieces but it is sure not to disappoint. Otrio is an addictive game where strategy is at its highest as you go head to head with up to four other players in a race to get a correct sequence of circles.

Otrio just looks awesome from its box to its board. If you're looking for something a little different than the typical board game then you found it. Getting three pieces in a row has never been this fun or challenging. Give Otrio a try today and see how well you can do against your friends.

The game Otrio should come with the following components. These are based off of the original game and don't include components from any expansion packs or different editions.

Get three circular pieces of your color in a row in either ascending or descending order, the same sized pieces in a row, or three concentric pieces in the same space to become the winner.

Perparation: Place the pieces on the outermost board. Like colors should be placed together.

3 or 4 players: each player selects a color. Remove one color from the board if only 3 are playing.

Rules for Placing Pieces:
Once a piece is placed, it cannon be moved. If you can't play a piece, you skip your turn Keep placing pieces until some gets an Otrio

Please keep in mind that the official Otrio rules and instructions could be different depending on the game version you have. The rules below are some of the exact directions that came in the original packaging and will teach you how to play Otrio. Download these original PDF game rules or print them for later use.


We are on the hunt for more information about Otrio but have not found anything yet. If you have any information regaring the Otrio game rules or instuctions let us know and we will add it to this page. We will post any updates to this page as soon as we find it.

Share with us your comments, funny stories, tips, advice, strategies, creative ways to play, questions about how to play, problems with the directions or anything you want about Otrio. All submissions will be reviewed within 24 hours.

Terra Nova says:
There's a game app called Color Rings Puzzle that is very similar to this only you play it solo and each otrio you get causes those rings to disappear. You play until you can't place the next generated piece
Lisa Anderson says:
If I have an otrio in descending order, but on the smallest piece of the otrio I have a large ring around it. Does this still count as an otrio.
Cheryl says:
When you move your piece onto the board, does it have to stay in the same row that it came from or can it be placed anywhere on the board?
Jennifer A Brid says:
When playing with 2 players and two sets of colors. Can you clarify the winner, i.e. don't you still need to win by the same color scheme. My 10 year old son says he won, but he didn't have the same color scheme. We love your game! Thanks.
Malay says:
Hi there. I bought a Gotrio game. I realize that there is 1st player move advantage. I do not know how to nullify that advantage for a game to be fair. Kindly advice
yowzah says:
Tess, because the other players will prevent you from doing so.
Tess says:
I'm missing something. How do you place a piece? If anywhere, why not play a large, med, small piece in the same circle within your first 3 turns?
Nancy says:
Can one win if another color is in the same space? Ex: descending order win...red on outside and last piece for a win is small blue on the inside?
Brady says:
Actually i see there is a bit about not using the center piece in the instructions. However i highly suggest each player use 2 sets in a 2 player game once (unless it's for kids that haven't learned the first player move advantage)
Brady says:
Hi Cinda - there actually isn't a rule to that effect. If you're playing with 2 people it is suggested that you each use 2 colors which are opposite from each other (and not adjacent colors). In a 2 player game with each player only using one color, the first person that moves can always win pretty quickly if they know what they're doing. It's usually fun for younger kids but using 2 sets each really balances the game out and is much more fun. Hope you like the game, i actually invented it and still enjoy playing.
Cinda says:
In my printed game instructions, it said something to the effect of, when one person keeps winning, then that person can no longer play the middle game piece in the center of the board. I can't remember exactly what it said and the online directions don't say it. Can you print it here?
©2022 Board Game Capital - About Us