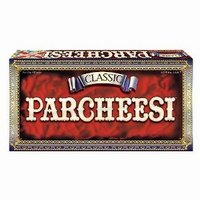 How To Play Parcheesi (Instructions)

Parcheesi, the board game is based on the Indian game of pachisi. Originating in the U.S. in 1860, Parcheesi is a long-time favorite game for families. Players try to get all four of their pawns around the board from their starting position to their home row. Competition can get pretty tough when other players get in the way by capturing pawns and sending them home, erecting blockades, or finding ways around your traps.

Parcheesi is a wonderful game for families, but be aware, there are small pieces which can be a choking hazard for young children. Also check out Parcheesi Deluxe and Parcheesi Royal Edition for more Parcheesi fun for the whole family.

The game Parcheesi should come with the following components. These are based off of the original game and don't include components from any expansion packs or different editions.

To win Parcheesi you must be the first player to move all four of your pawns from your start circle to home.

Please keep in mind that the official Parcheesi rules and instructions could be different depending on the game version you have. The rules below are some of the exact directions that came in the original packaging and will teach you how to play Parcheesi. Download these original PDF game rules or print them for later use.

Share with us your comments, funny stories, tips, advice, strategies, creative ways to play, questions about how to play, problems with the directions or anything you want about Parcheesi. All submissions will be reviewed within 24 hours.