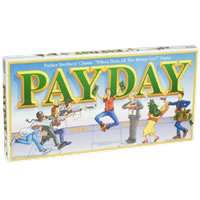 Payday is a day that everyone can't wait until it comes. In the board game Payday, you'll want the end of the month to come just as bad. Where does all your money go during a one month time period? Play Payday and see if you can win your friends by having the most money after payday comes. Choose how long you want to play for whether it be one month or six. This strategy board games offers real life expenses and opportunities to make money and loose money.

The game Payday should come with the following components. These are based off of the original game and don't include components from any expansion packs or different editions.

To become the Payday champion, you must have the most money after payday comes within the time frame (in months) previously chosen.

Perparation: To begin the game, all players need to decide for how many months the game will be played (usually 2-4 months works best lasting 1-2 hours). All cards must be shuffled. One Deal card is then set aside (face down) by sliding it under the edge of "Yard Sale" and under the "Deal" sign. All players are placed on the "Start" space with $3,500 each: two $1,000 bills, two $500, and five $100. According to the rules, two players must be chosen to act as the Banker and the Loan Record Officer. A player is then picked to start and game play proceeds to the left.

Game Play: Players may take out a loan at any time during the game in increments of $1,000. The Loan Record Officer records all financial transactions. Interest rules on outstanding loads each time you land on "Pay Day" are 10%. Paying off your loans in increments other than $1,000 or on any day other than pay day is against the rules.

Players are advanced by the number that appears on the die and game board spaces are treated as a calendar. Follow instructions given for each space landed on. Players must take the number of Mail cards as indicated on the mailbox flag and instructions of payment are followed.

Skipping over Payday is against the rules. All players must pay or receive their dues when passing this point. A $3,5000 monthly salary is given, loans or interest on loans must be paid, bills collected throughout the month are paid, and player is placed on Start. All unused Deal cards that player still has are returned to the pile.

Card Rules: Board Space Rules: Upon finishing the last payday of the predetermined time period, player must wait until everyone finishes. You may still participate in the Lottery, Radio Phone-In Contest, Happy Birthday, or Walk for Charity, if one comes up. The player with the most net cash in hand or lowest amount of debt wins the game.

Please keep in mind that the official Payday rules and instructions could be different depending on the game version you have. The rules below are some of the exact directions that came in the original packaging and will teach you how to play Payday. Download these original PDF game rules or print them for later use.

Share with us your comments, funny stories, tips, advice, strategies, creative ways to play, questions about how to play, problems with the directions or anything you want about Payday. All submissions will be reviewed within 24 hours.

KD says:
You start the older version with 325 dollars.
Jessica Fitzger says:
What happens when your out and someone is in and the get to take money? Do you lose money if your out?
Jessica Fitzger says:
What happens when your out and someone is in and the get to take money? Do you lose money if your out?
Parth Unmesh Da says:
What if three players finishes off the game early and the fourth player has still needs to play a month. I know that other players can play on Lottery but Can the they play from the beginning again by paying double amount of money to roll simple dice so as to reduces the chances of fourth player winning/losing?
Steve says:
How do you refill the money in the jackpot space (after someone has rolled a six and taking all the money)?
Matt says:
How many 100's, 599's, 1,000's, 5,000's, and 10,000's bills are there in the game?
Gilbert mock says:
Do you show other players your money event cards etc, or you can hide them away?
john wick says:
Nowhere in the rules does the game actually specify how much the jackpot is supposed to be.
Glen says:
We love the game but need help with a dispute. If you draw 2 cards from the mail space and they both say move to deal or buyer space then can you move to a deal space with the first card and the buyer on the second card and sell it on the same turn since they are from the same mail space and same turn? The rules say the mail cards have to be played immediately.
Addy says:
Do you get anything for passing payday first?
JMartin says:
Went to a hotel and got the 1975 edition. They don't have 1000 bills
Ashley Benson says:
We purchased this game in 2017 but have lost the directions. Could you send us a new set? If so I will send my address. Thanks a lot!!
Glenroy Forrest says:
I have a payday game set from the early 90s it is in excellent condition except that I lost the rule book. I have not used it in over 15 years. I invited some friends over and we had a fight over the Bonus. Could you send me the rule on Bonus
Chuck says:
I have a pay day game from when I was a kid so its from the 80's. Game board, mail, deals, etc are all different. The rules and concept are the same, but I cant find the actual rules anywhere. I need to know for example, given that the money denominations are 5, 10, 20, 50, 100 and 500, how much money should someone start out with? This is a major factor since it would set the precedence for needing loans etc. Can anyone help me?
salsa says:
when your finished with your last month and another player lands on lottery,can you join the lottery?
Faithy says:
I bought "Payday" from a second hand store.all the pieces were with the game, but no instructions and most of the loan papers are gone. How can I get another set of both?
SABRINA says:
When playing pay day after a player retires from the game and another player lands on daylights savings does the player that is retired from the game still collect the 325 for payday? And do they participate in town election?
eeyore says:
just been teaching and playing with my girls aged 8 and 10...we play it 12 times (over a period of days) making a whole year! the girls LOVE IT !!!! great game... helps them add up, take away, learn values...
Traci says:
I'm confused on where to put the money. Does it only go to the Jackpot if the instructions say so and the rest always goes to the bank?
jasckson says:
I think there suppost to produce a new version of Catcheroo in the future... i think the idea is great and the slogan (the game of switch and snatch) is just perfect for it...
Tyler says:
Always loved this game! Be sure to check out "Big Payday" as it is the best version of the game.
©2022 Board Game Capital - About Us