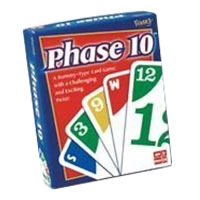 How To Play Phase 10 (Instructions)

Phase 10 is similar to Rummy but has a fun and challenging twist. In Phase 10, there are ten phases each player must complete in order to become the winner. Each phase is different and more challenging. If you can complete your phase during each round you can move on to the next. If you don't, your stuck on that phase until you do.

Phase 10 is a great portable card game that doesn't take long to learn how to play. Each round is ended by another player so things can get heated up as players end rounds you aren't done with. Try playing the classic card game Phase 10 today!

The game Phase 10 should come with the following components. These are based off of the original game and don't include components from any expansion packs or different editions.

To be the first player to complete all 10 Phases. In case of a tie, the player with the lowest score is the winner.

Please keep in mind that the official Phase 10 rules and instructions could be different depending on the game version you have. The rules below are some of the exact directions that came in the original packaging and will teach you how to play Phase 10. Download these original PDF game rules or print them for later use.

Share with us your comments, funny stories, tips, advice, strategies, creative ways to play, questions about how to play, problems with the directions or anything you want about Phase 10. All submissions will be reviewed within 24 hours.