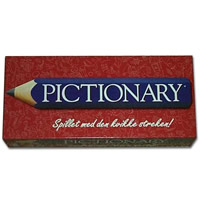 How To Play Pictionary (Instructions)

Pictionary is great for date activities, work parties, or to play in any large group. Pictionary is a board game where a player from each team take turns drawing a word on a card that they pull. Their team members need to guess this word with no other hints other than drawings. You don't need to be a great artist to be good at Pictionary. You just need to be creative and draw the right things at the right moment to win this game.

To keep the game interesting, there are also extra activities on the game board spaces and depending on the space

your team lands on, your next topic is assigned. With close to 500 cards having 5 words on each, this board game can easily keep everyone entertained for hours. Don't forget to check out our instructions on how to play Pictionary. Pictionary has been a popular board game for years and a fun activity for everyone!

To beat your opponent(s) at Pictionary, your team will need to correctly identify the right word from clues drawn on a piece of paper. Each word correctly guessed advances your token closer to the Finish square. First one to reach this square wins.

Perparation: Once the Pictionary board has been laid out, place the box of cards in the middle of the board. Hand out the category cards for reference and teams are created (preferably equally). All teams start on the "Start" square and will need to have a pencil and pad of paper. Determining who goes first is simply the team that rolls the highest after choosing who on each team will be drawing first. "All Play" is the first round so everyone on that team can guess.

Game Play: The Pictionary rules for game play are as follows. Each team draws a card at the beginning of their turn which will tell you what you will be drawing based on the color space your team's token is currently resting on. The chosen person to draw then has only five seconds to look at the card and plan their drawing strategy. The one minute timer starts and the person drawing for the team begins drawing without using any verbal communication or gestures. Writing numbers or letters on your paper is against the rules.

The same team that is drawing is now trying to guess the drawn clue. If this is accomplished in less than one minute they advance themselves on the Pictionary board by rolling the die and a new card is drawn. Rotating drawing team members (the person drawing the clue) is part of the rules.

As part of the Pictionary objective, the first team to guess the correct clue on the Finish square is then named the winner of the game. It does not need to be your turn to win.

The following Pictionary rules are also to be followed during game play:

Please keep in mind that the official Pictionary rules and instructions could be different depending on the game version you have. The rules below are some of the exact directions that came in the original packaging. Download these original PDF rules or print them for later use.

Share with us your comments, funny stories, tips, advice, strategies, creative ways to play, questions about how to play, problems with the directions or anything you want about Pictionary. All submissions will be reviewed within 24 hours.