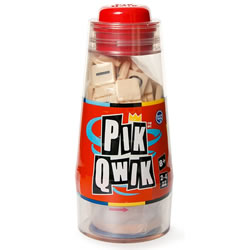 How To Play Pik Qwik (Instructions)

Thinking of and spelling out a word has never been so challenging and so fun. In this whirlwind of a game, players attempt to spell a word that matches the four categories (Same Name, Mix Up, On Topic, and Rhyme Around) before their opponents do and smack the buzzer for the win. Short words are your friend in this tile game but finding those letters in the pile in front of you is your enemy at times. With a limited number of letters in the pile, others may have used your letters before you could get to them so you'll need to quickly think of a new word.

Pik Qwik is a great addition to any party or game night and is easy for kids as young as 8 years old to play. Games don't take that long to play and will average around 15 minutes each. Learning how to play Pik Qwik is also a breeze and easy to understand. The only strategy is spell your word fast! You'll have a blast playing this game as a family or with friends. Game comes with a clear locking container with 2 compartments for easy storage. The buzzer is even integrated into the storage case. Purchase your own copy of Pik Qwik today and you'll have fun playing it for years to come. 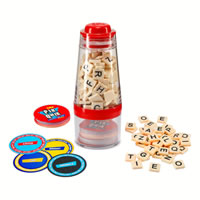 Who knew spelling would be so fun? Pik Qwik is a fun little game that gets the whole family racing to complete a word that fits on the category cards. We thought the cards looked great other than two big things: the topic is kind of hard to see and why did they put two different languages on the same side? You have to hunt for the right side of the card to read and it is very confusing. Either have a different version of the game in a different language or put the other language on the opposite side of the card in a different color or something. This made game play very cumbersome and even harder for younger kids.

The container the game comes in is really clever and made from some thick clear plastic! The buzzer sits on top, the tiles are in the middle and the cards with the rules are on the bottom. We also have two complaints about the container: the buzzer is completely exposed so our buzzer broke after dropping the container once, and the bottom section twists off the opposite way from what you expect. Why they all couldn’t twist off the same direction is beyond us but you’ll have to pay close attention to the arrow on the bottom to know which direction to twist.

Once you get playing, this game is fun, fast paced, easy to learn how to play and doesn’t take all afternoon to finish. It would be cool if you got some bonus points for spelling a longer word but we like the simplicity of just spelling something fast. Sometimes any word that fits is better than no word or a short word at all. 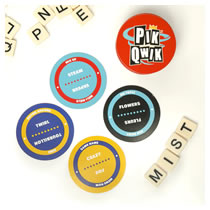 The game rules look like a card and fit nicely in the bottom compartment. They explain the game rules very nicely and are broken up into logical sections as the game rules accordion out. Be gentle with them because they get thin where to two circles meet. There are no graphics on the game rules but we didn’t feel like they were needed since things were so easy to understand. We did, however, have to cross reference them a bit the first time around to make sure we were playing the categories correct.

If you want a fun, simple game that you can pull out and play in minutes that involves some fast thinking and spelling, then Pik Qwik is your game. For the price and the game experience you’ll get, we think it is a great deal and definitely a game you’ll play off and on throughout the years.

The game Pik Qwik should come with the following components. These are based off of the original game and don't include components from any expansion packs or different editions.

To win Pik Qwik, you'll need to have the most points after 20 rounds by successfully completing the words on the cards.

Please keep in mind that the official Pik Qwik rules and instructions could be different depending on the game version you have. The rules below are some of the exact directions that came in the original packaging and will teach you how to play Pik Qwik. Download these original PDF game rules or print them for later use.

Share with us your comments, funny stories, tips, advice, strategies, creative ways to play, questions about how to play, problems with the directions or anything you want about Pik Qwik. All submissions will be reviewed within 24 hours.