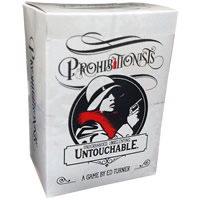 How To Play Prohibitionists (Instructions)

Have you ever played a card game where if you don't work hard as a team, the deck (the Boss in this case) could actually win ? Join in the fight against the mob and see if you can capture the Boss in this old fashion styled gang card game. Use tactic cards, fight obstacle cards and job cards to see how well you can do.

Prohibitionists is a fun card game for up to five players that plays out in a little less than an hour. After one game you'll be hooked and will want to play again. Game play is fairly easy to learn how to play and is packed with just enough luck, strategy and possibilities that it is very entertaining to play. Purchase your own copy of Prohibitionists and you won't regret it. 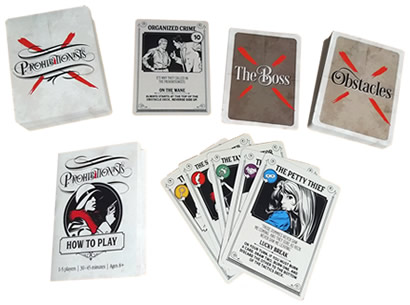 Wow, where to start? Prohibitionists, the card game, comes in a tiny box (at least it did for us) but man does it pack a punch - a big mob style punch! Turn the lights down, get the ragtime music playing and shine a spot light on your gaming table - it's time to play Prohibitionists. The deck looks a little hum drum but after playing through your first game, you realized they fit exactly with the style of game the creators wanted to have - a detective/mob/secretive and somewhat old fashioned styled card game.

Game play blew us away with how simple it actually turned out to be but how strategic it could become. The fact that if players don't play right and use up all the tactic cards, the game could end with no winners really ups the competition as a group. Other things we loved about the game play is that you can discard your whole hand, use special powers on your job card and even use your job card as a last ditch effort to get ahead. Oh, and the overflow addition brings a whole new level of possibilities and fun into this game. 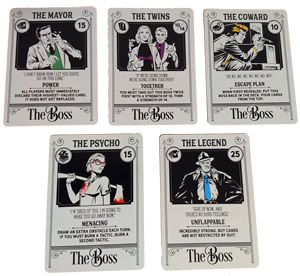 Prohibitionists is a very well thought out game and we thoroughly enjoyed it. Everyone was begging to play again after the first game. While an eight year old might be able to play fine (depending on how into gaming they are), we felt like there is enough going on in this game that someone slightly older might enjoy playing this a little more. There is a lot to read during game play which adds to the fun but also the complexity for younger audiences.

We thought the deck artwork looked great. A little wordy, but as mentioned above, it adds value to the game and keeps a fun theme going. The use of subtle color was great and the little suits in the corners nicely placed. The rule book was so neatly fit into the small box we almost missed it. Nice use of space (although we liked the full page rules layout a little better).

Prohibitionists is a unique and fun game that will never play the same. While all players work together to track down the boss, it's up to you in that pivotal moment to take out the boss when he shows up to win. We loved it and had a blast playing it. This is a great game to add to your collection and we can see it becoming a favorite for your game nights.

Be the first player to take out the Boss and you'll win.

Please keep in mind that the official Prohibitionists rules and instructions could be different depending on the game version you have. The rules below are some of the exact directions that came in the original packaging.

Share with us your comments, funny stories, tips, advice, strategies, creative ways to play, questions about how to play, problems with the directions or anything you want about Prohibitionists. All submissions will be reviewed within 24 hours.