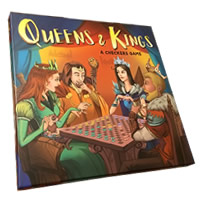 How To Play Queens & Kings (Instructions)

Wished you could play checkers with more than just two players? Well wish no more as the Queen takes over the King in this four player checkers style board game. Race to the middle to become a King and venture to the opposite side of the game board to become a Queen (each with their own newly converted special moves).

Queens & Kings is very easy to learn how to play and won't take all night to finish. Similar to Chinese checkers, players can jump over each other and is a free for all to stay alive. This is a board game for just about anyone. Don't miss out on the chance have this game in your collection. Buy yours today!

Honestly, we've had this thought for quite some time, "I wonder if you could somehow play checkers with more than just two people." Whirtel Games has done just that by creating a four player checker style game. Although similar to Chinese checkers, Queens & Kings looks and feels more like traditional checkers with its own tricks up its sleeve.

The first thing we saw when we opened up our game box was that our game board had a crack in it. We were only disappointed for a second when we realized the game board looked so realistic that that crack was actually printed on the board. We love the game board - it looks like real wood! Not to mention it is very sturdy and well made (like the rest of the game components). The miniature poker style chips look and feel amazing and the little felt draw string bag to keep them in is the cherry on the top. Excellent game quality and awesome gaming components.

Game rules are very simple and mimic that of your typical checkers. We did feel, however, that the rule book was a little redundant with information slightly scattered around. We felt like it could have been condensed and organized a little better but that didn't stop us from learning how to play in less than five minutes. One more gripe while we're critiquing - the game box is so perfect fitting to the game that unless you have drawstring bag really flat and slightly loosened, the lid won't fit. Pieces could fall out of the felt bag so we just kept them in their plastic bags. 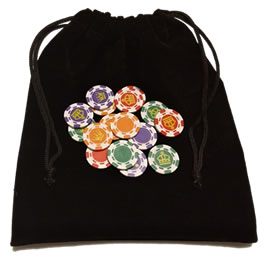 Playing is a lot of fun. You typically think a king is the best but in this game that's not true. It's the queen with all the power. We liked the mad dash to the middle and that there were two special move pieces. Trying to find the right piece when you needed it (if your newly flipped over king reveals to be a queen) wasn't a huge deal. We actually had an extra queen and king at the start of the game so they came in handy. Playing with four players was a blast. Playing with three was a little odd since the person with no one in front of them had a slight advantage to become a queen. Still nice to play checkers with more than just two players.

Overall we really liked this game. If you like checkers and want a slight variant that includes up to four people then this is your game. We were impressed by the durable and well made game pieces. Queens & Kings is a great staple game to have in your collection - we're glad it's in ours.

You'll win if you or your team is the only one with pieces left on the board.

Please keep in mind that the official Queens & Kings rules and instructions could be different depending on the game version you have. The rules below are some of the exact directions that came in the original packaging.

Share with us your comments, funny stories, tips, advice, strategies, creative ways to play, questions about how to play, problems with the directions or anything you want about Queens & Kings. All submissions will be reviewed within 24 hours.


Ikie Corbin says:
Hi Austin We have set our kickstarter campaign for March 2020. You can download the print-n-play here. linktr.ee/whirtelgames
Austin fair says:
How can I get the game I would like to play the game how can I get the game
Huge List Of
Free Board Game
Giveaways!