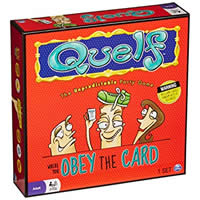 How To Play Quelf (Instructions)

Are you good at following directions? Like really good? Quelf is a board game where you'll need to do exactly what the cards say in order to move and ultimately become the winner. Just be prepared, though, most of the things you'll be asked to do are down right silly!

Quelf will have you laughing and acting silly as everyone tries to obey their cards so they can be the first person to land on the last spot on the board. Intended to be played by adults, this is a hilarious game to play with up to eight people. See for yourself how much fun this board game can be. Read through the game rules below for more instructions on how to play Quelf.

First player to get to the finish space and complete the final Scatterbrainz question will become the winner.

Please keep in mind that the official Quelf rules and instructions could be different depending on the game version you have. The rules below are some of the exact directions that came in the original packaging.

Share with us your comments, funny stories, tips, advice, strategies, creative ways to play, questions about how to play, problems with the directions or anything you want about Quelf. All submissions will be reviewed within 24 hours.