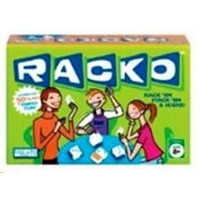 How To Play Racko / Rack-O (Instructions)

Racko is a classic card game that has been played by families since the 1950s. This fun game will have payers young and old playing to be the first to get their Racko. Players randomly put ten cards on their rack. Then the race begins to see who can get them is sequential order by trading them out one by one. The first player to get all ten cards in numerical sequence wins the game.

This may sound simple, but we'll see about that when you have other players trying to do the same thing and using the cards that you need. Playing Racko takes a lot of concentration, skillful play, and some luck. Have all of these? If you do, you'll win the game of Racko. Check out Racko for a fun game that the whole family can enjoy.

The game Racko should come with the following components. These are based off of the original game and don't include components from any expansion packs or different editions.

To become the master at the game of Racko swap out the cards in your rack one by one. In each round, be the first to get them in progression from low to high and go Racko.

Please keep in mind that the official Racko rules and instructions could be different depending on the game version you have. The rules below are some of the exact directions that came in the original packaging and will teach you how to play Racko. Download these original PDF game rules or print them for later use.

Share with us your comments, funny stories, tips, advice, strategies, creative ways to play, questions about how to play, problems with the directions or anything you want about Racko. All submissions will be reviewed within 24 hours.

Deb says:
We picked up this game as we headed out on our vacation and played it a ton. We read through all the game rules first before playing so it was much easier to get started. I didn't know there was different versions for this game. I'll have to look into that.
Sam says:
Pretty easy game to learn how to play. I prefer Racko over most other card games. The rules are well written and the game play is challenging and fun. Most don't know how to play but once you learn it is a good one to keep around.
nancy says:
I love Racko its sooo much fun!
©2023 Board Game Capital - About Us