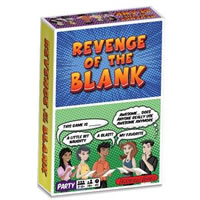 Revenge Of The Blank Game Rules

How To Play Revenge Of The Blank (Instructions)

There are a variety of games out there that require players to play a specific card at the right time to score the point. Well, what happens when you don't have that perfect card? The creator of Revenge Of The Blank calls it "my-cards-suck-itus." We've all been there with nothing good to play and when it does happen the game suddenly become dull and unamusing.

Revenge Of The Blank is a game where players get to create their own cards with infinite possibilities as you can write whatever you want or even draw your answer on your whiteboards. Inside jokes, repetitive answers or creative art work can all be used making this game one of a kind. Make Revenge Of The Blank your next party game and don't forget to check out the expansion packs. 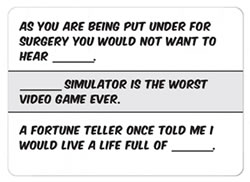 Revenge Of The Blank is a fun party game very similar to other games out there where players have to answer a question which is in turn judged. Then one answer is selected and that person gets a point. Where this game stands out above the rest is it solves a problem those aforementioned games have - as the author so eloquently puts it: “my-cards-suck-itus.” As we played the game, this made a huge difference since no one had to play that dumb card in their hand just to get rid of it. All answers made much more sense and had us bursting out in laughter. We also liked that your awarded cards are kept secret under your score pile card so others can't have pity on you or sway the game at all.

The game comes in a small neat box brightly colored with fun graphics. Inside are the easy to read cards, 8 dry erase markers with erasers on the top, 8 thick white boards (we're glad they don't have borders since those are a pain to keep clean) and the rule book. We like that the game goes up to eight players and opens up the possibilities of having large groups play and even being able to branch off into pairs (couples) to include even more people. The rules also encourage you to personalize the prompts so that they might apply better. For example, “My partner asked me to stop ____.” can be changed to “My girlfriend asked me to stop _____.” Half the time we forgot to do this since there was enough variety in the cards.

At the end of the rule book there are some fun variations of the game that really do put a twist on the game play. We only tried the “you snooze, you loose”

variant and found it more challenging and helped keep the game moving. The rules also offer a QR code and a website to go to to learn how to play Revenge Of The Blank by watching a video. There is also a guide indicating how many cards to hand out depending on how many people you have playing which we found very helpful. Overall, the rules are easy to read due to the very simple nature of the game.

Things we didn't like...for what it is, there isn't really anything to not like. Revenge Of The Blank is a great party game that has just enough differences from other similar games that sets it apart, and we believe, sets it above the others. Oh, and I almost forgot, being able to draw your answer on your white board kicks this up a whole new level on the hilarity scale - do I smell another variant coming? How about drawings only!

In Revenge of the Blank, you are trying to gain the most points by being selected as the winning response for the most rounds.

Please keep in mind that the official Revenge Of The Blank rules and instructions could be different depending on the game version you have. The rules below are some of the exact directions that came in the original packaging.

Share with us your comments, funny stories, tips, advice, strategies, creative ways to play, questions about how to play, problems with the directions or anything you want about Revenge Of The Blank. All submissions will be reviewed within 24 hours.