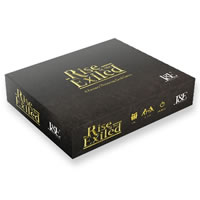 Rise Of The Exiled Game Rules

How To Play Rise Of The Exiled (Instructions)

Play a card game unlike any other you have ever played. Rise Of The Exiled is a thrilling battle card game that gets players off their seat and into card throwing mode. This card game combines great characters with strategic attacks and special abilities with physically tossing your attack cards toward your opponents.

Including up to 12 people in teams, almost all ages can join in the fun of this quick action packed card game. Once you have mastered the basic game rules and referenced the rulebook for special abilities, you'll be on your way to the battle field. Check out Rise Of The Exiled and be sure to add it to your game collection today. 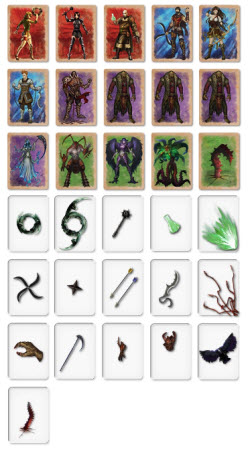 From the moment we saw this game and learned about how it is played, we were excited to be able to give it a try. Rise Of The Exiled combines your typical battle/attack card game with the act of physically throwing your attacks toward your opponent. This opens up the game to a whole new realm of funness (pardon the invented word).

Some people aren't into fantasy attack style card games but when you involve throwing things in an attempt to hit your opponent's character card, they're in. We experienced this in our testing group (we try to get the most diverse group together). Some were slightly reluctant to play at first glance, but after the first round they were hooked.

We had the game rules handy and referenced them a lot through the first few games until we got the hang of the game play and the specific rules for each character and weapon card (helpful hints are also on the back of the cards). The rulebook is very helpful and nicely written (19 pages in all). Examples are given with useful pictures, clear concise explanations about different abilities are well organized and colorful point zones on each character are crucial. There is a lot to take in but you can keep things simple until you work up to it.

The gameplay is awesome! We loved it. Players work in teams to destroy their opponents. After each turn, everyone at the same time will move their card one card length in any direction which opens up a fun strategy element (use a big table). The attack phase is obviously the best as everyone simultaneously attacks. Cards go flying and even at times hit and deflect each other. Some cards will overlap, some will bounce away, others will just barely slide into position hitting their target. Luck (or skill) in where your attack card lands creates a fun atmosphere as the youngest or more "untalented" thrower can make a great hit. Some special abilities even make your opponent throw their attack card with their eyes closed or attacks can extend themselves to hit two players.

As far as quality goes, we were given a beta test pack that wasn't fully complete nor a representation the actual final product. From what we received and played with, this game will be amazing when fully produced and based on how well the game has been put together we have full confidence in the game creators to deliver a high quality game.

Our only complaint, if you can even call it that, is it would be nice to somehow know what everyone's score is at any given time and also nice to not have to remember your own score. The other thing we found is some people will get pretty particular whether an attack card is actually overlapping or not. A magnifying glass was almost brought out at one point. We don't see how you can get away from that. There is always that one player...

In summary, this game rocks! We can't even imagine the fun, chaos and excitement that would occur if 12 people were playing but we were impressed that a game this simple could handle and involve so many people. Rise Of The Exiled is a small game that packs a huge punch (or should we say blade disc, claw, vine, star knife...).

The game Rise Of The Exiled should come with the following components. These are based off of the original game and don't include components from any expansion packs or different editions.

Be the only team with at least one character still in play and you'll win.

Please keep in mind that the official Rise Of The Exiled rules and instructions could be different depending on the game version you have. The rules below are some of the exact directions that came in the original packaging and will teach you how to play Rise Of The Exiled. Download these original PDF game rules or print them for later use.

Share with us your comments, funny stories, tips, advice, strategies, creative ways to play, questions about how to play, problems with the directions or anything you want about Rise Of The Exiled. All submissions will be reviewed within 24 hours.