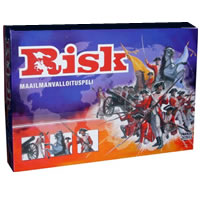 How To Play Risk (Instructions)

Risk is a popular game for major strategy type players. Risk can be played for hours and is a board game of world domination. In Risk, the object is to conquer the world by attacking to acquire territory and defending your own territory from your opponents. Risk is a turn-based game and is best if played with two to six players.

This board game is played on a board representing a Napoleonic-era styled political map of the Earth.

The Risk game board is divided into 42 territories comprising six different continents. With the roll of the dice and by colleting certain types of cards, one begins to "conquer" the world in the board game of Risk. The board game of Risk is a widely liked and played game.

To conquer the world by occupying every territory on the Risk board, thus eliminating all your opponents.

Please keep in mind that the official Risk rules and instructions could be different depending on the game version you have. The rules below are some of the exact directions that came in the original packaging. Download these original PDF rules or print them for later use.

Share with us your comments, funny stories, tips, advice, strategies, creative ways to play, questions about how to play, problems with the directions or anything you want about Risk. All submissions will be reviewed within 24 hours.


Jennifer Bolton says:
I’m looking for the directions for 1980 RISK, can you help me
Manny Presicci says:
Growing up,I remember risk had a large board that folded in 3. I have bought at least 2 risk sets and been disappointed that each time the board was smaller. Where can I get a risk set with the larger board. The first small board came with the deskshelf set. I can understand that but why does the 1959 edition come with the small board. I dont think they were using the small board in 1959.
Tanner says:
Is there a newer version of this game that has come out since 2003? That is just the last version of Risk rules that I see.
Jake says:
I tride so hard to learn how to play Risk but after reading through the rules and then being shown how to play I still didn't get it so I gave up. I know some love this game and will play for hours but I sure don't see how.
Steve says:
I have always wanted to learn how to play Risk and even attempted to one time but was lost by the rules. I think I even played it once but didn't get to finish it. Either way, I haven't quite figured out what the craze is with this game but would be willing to give it a second chance - or should I say, I'd be willing to "risk" it.
Sharon says:
Can take lots of time to finish. Took awhile to figure out actually how to play it but overall my son and his two children like it.
Matt Kristofiki says:
This game could have been made a lot less complicated than it's actual finished product. I spent more time arguing over the rules than really playing the game itself.
gamer says:
This game rocks. Its a great game to play with a bunch of friends.Its a gotta have game!
But munch says:
this game is awesome you just have to play it which you havent so i dont think you should talke about it.
coolie says:
sound boring. ive never played this game. sounds too boring
Huge List Of
Free Board Game
Giveaways!