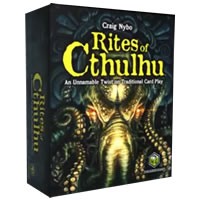 How To Play Rites Of Cthulhu (Instructions)

Bluff, trick and steal to become the grand cultist in this horror fiction card game of six mini-games. Rites Of Cthulhu is a moderately difficult card game to learn how to play strictly due to the six mini-games being different. You'll be using power plays, using special powers and trying to beat your opponent's hand in this surprise filled, strategic card game.

Rites Of Cthulhu is a game you'll want to learn more about before purchasing or playing to make sure it's right for you. Great for up to six players, this game will take you around an hour to play. See what we thought about the game below and be sure to tell us what you think of the game in the comments below. 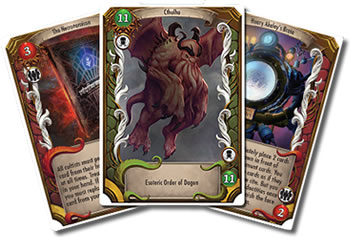 We try to round up the correct audience that each of our game reviews is targeting. Rites Of Cthulhu was a bit tricky to find an exact match but we pulled a group together that had similar interests to the horror fiction genre that the game appeals to. Based heavily on the work of H.P. Lovecraft, this intriguing card game plays out in six distinct rounds or rites.

While the true audience base for this game might be smaller than most games, we all had a fun time playing this slightly darker card game. It seems really intense at the beginning but once game play is underway, things clip along pretty well. We really liked the twist of the six rites. It reminded us a bit of an escape room with a few different twists and turn and felt like a mystery as you journeyed through the game. These mini games kept things interesting and kept you on your toes.

A few more things we liked that we wanted to bring up. Everyone is trying to collect the most number of artifact points and this is no simple feat. There are power plays that abort the current rite being played, power plays that let you gain a free artifact, or power plays that steal one from the Coveted Artifact pile (don't worry, you'll catch on to the nomenclature of the game quick). Powers on artifacts can be used twice - once immediately when the card is shown and a second time whenever they want during the game. These mechanics brought a source of strategy and surprise. 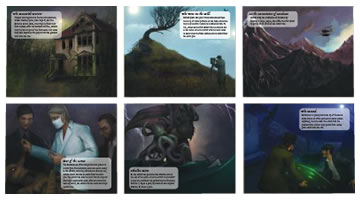 A few things we struggled with. The playing cards look great but the rite cards looked way too dark and a little lackluster. We thought it was a nice touch to have the game rules for each rite on the back of the tile but would have liked to seen more visually stunning rite tiles. Also, if you aren't into fantasy, horror and the like, the vernacular of the game seems really complicated. Some will obviously love this characteristic though. Lastly, the 56 page game rules is no small task to complete. Thankfully, there are some great tutorial videos out there explaining how to play.

In summary, Rites Of Cthulhu is a card game that forces you to immerse yourself in the horror fiction/fantasy world and is a niche game for a smaller matching audience. While the basics of the game play is fairly straight forward, there is a lot going on in the game to keep track of. A great game for those it's intended for.

The game Rites Of Cthulhu should come with the following components. These are based off of the original game and don't include components from any expansion packs or different editions.

After playing a number of Rites, the player with the most points from artifact cards wins.

Please keep in mind that the official Rites Of Cthulhu rules and instructions could be different depending on the game version you have. The rules below are some of the exact directions that came in the original packaging and will teach you how to play Rites Of Cthulhu. Download these original PDF game rules or print them for later use.

Share with us your comments, funny stories, tips, advice, strategies, creative ways to play, questions about how to play, problems with the directions or anything you want about Rites Of Cthulhu. All submissions will be reviewed within 24 hours.