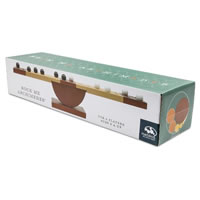 How To Play Rock Me Archimedes (Instructions)

What to play a challenging game that also throws in a little gravity and physics? Rock Me Archimedes is a brain twisting game where your goal is to get four of your marbles to the end of the board but look out for the tipping point. You'll have to plan each move with the thought in mind "will this throw the board off balance?"

In Rock Me Archimedes, you are trying to get four marbles to the end of the board without reading the tipping point.

Perparation: Set up board.

2. If either end of the rocker board touches the table, the player who caused it to happen forfeits the game and his or her opponent wins.

Please keep in mind that the official Rock Me Archimedes rules and instructions could be different depending on the game version you have. The rules below are some of the exact directions that came in the original packaging.

Share with us your comments, funny stories, tips, advice, strategies, creative ways to play, questions about how to play, problems with the directions or anything you want about Rock Me Archimedes. All submissions will be reviewed within 24 hours.


Luke says:
Can u jump 2 opponent marbles at a time or just 1?
Nancy says:
what happens if opponent dropts marble
Graham says:
Nana: Yes, you can move your marble in any direction. Sydney and Colette: A jump of any number of your opponent's contiguous marbles counts as "1" of your move steps, even if it's two or three or more marbles in a row. You cannot jump any of your *own* marbles, however. Maudie: You're right, that's a quirk in the rules, and, I believe, should be changed by a house rule. (Otherwise, everyone would just aim for their opponent's end zone — it's easier to get 3 there than to get 4 in your own!)
NaNa says:
Can you move your marble backwards
Maudie says:
What happens if your opponent has their marbles in your inzone and there is not room for you to put your foyr marbles there?
Sydney says:
We would like clarification of the meaning of "move", is jumping the opponents marble one move or two? For now we decided to use a house rule, until we have clarification otherwise. So, our house rule is: you can only jump an opponent if you roll a 2 or 3, and a jump would count as two moves.
Colette says:
By jumping your opponent's marbles, is the consensus that 'jumping' means one opponent marble at a time with a space between them - as in Chinese Checkers - though the string of opponent marbles would constitute one move, OR, does the interpretation mean one jump involves vaulting over any number of adjacent opponent marbles with no spaces between them?
Huge List Of
Free Board Game
Giveaways!