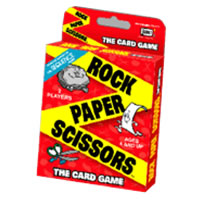 Test your luck in this game of rock, paper, and scissors. Rock tops Scissors, and Scissors top Paper, but Paper tops Rock. Check out Rock Paper Scissors card game today and see how your luck holds out.

Collect as many cards as possible.

Please keep in mind that the official Rock Paper Scissors rules and instructions could be different depending on the game version you have. The rules below are some of the exact directions that came in the original packaging.

Share with us your comments, funny stories, tips, advice, strategies, creative ways to play, questions about how to play, problems with the directions or anything you want about Rock Paper Scissors. All submissions will be reviewed within 24 hours.


gary ritts says:
Unlike the hand game, if there is a tie, just keep throwing down cards until a winner emerges. Superior fun for a few pennies.
Heidi says:
I've been trying to play and teach my daughter paper rocks scissors but she can't quiet grasp the timing of when to change your hand. Having cards will really help and make it easier for her. Same rules just less to worry about.
Steve says:
I was a little disappointed by this card game since it was exactly like the hand game except with cards. No need to buy it if it's no different.
Huge List Of
Free Board Game
Giveaways!