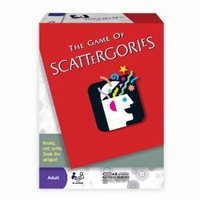 How To Play Scattergories (Instructions)

The game of Scattergories will have you thinkiing quick as you try to come up with a flavor of ice cream, a sport, and something that you would find in an electronics store. But the catch - they all have to start with the same letter. Sounds easy right? Think again. Scattergories will have you searching your brain for words that you wouldn't normally think to use. Now you have 3 minutes or less to make sure your answers don't match anyone else's answers. Good luck.

The game Scattergories should come with the following components. These are based off of the original game and don't include components from any expansion packs or different editions.

The object of Scattergories is to quickly fill out a category list with answers that begin with the appointed letter. You'll score points if other players haven't thought of the same answers. The player with the most points wins.

Please keep in mind that the official Scattergories rules and instructions could be different depending on the game version you have. The rules below are some of the exact directions that came in the original packaging and will teach you how to play Scattergories. Download these original PDF game rules or print them for later use.

Share with us your comments, funny stories, tips, advice, strategies, creative ways to play, questions about how to play, problems with the directions or anything you want about Scattergories. All submissions will be reviewed within 24 hours.

Tim says:
Can you name a specific person if category is squeezable
Jaccob says:
If the letter is a and you need a fruit would A Apple count as 2 points or just one?
Brandi says:
Hello. When answering a question, such as, "things you can squeeze" and the chosen letter is "M" can the answer be "my hand"?
Jay says:
Letter F. Question was states. I answer frenzy Acceptable?
Tori says:
Let's say we have the letter "d" and the category is color, could someone put down, "Derek's favorite color, black"? I don't think it should be allowed because then they could put names in front of every answer and get away with it
Pamela says:
Elizabeth: Not about who is right. Majority rules.👎👍👎👍👎👎 Example: the challenge is Name a place that starts with B. You name Baltimore. Another player says "no such place." A vote is taken and majority rules. There is not even a Scrabble rule: A player can look up a challenged word, and whoever is wrong loses a turn. This happened to me. I got voted down for Northern Pine. Was not allowed to google & sacrifice a turn if wrong. Also, easy to cheat if you lie: Just make up a name for a small park, then claim it's a small town in Wyoming (or wherever). My nephew says he does it all the time. Set some new ground rules for your friends. Maybe a trivia geek for a referee.
Elizabeth says:
Tonight we had a big argument. The question was "Kitchen appliance" and the letter was "t". Two people wrote"Toaster" and one person wrote "Toaster Oven." The argument was that a Toaster oven is different from a toaster and therefore should be allowed and some of us said that the word"Toaster" was the first word and therefore should be eliminated along with the two other people who had just written "Toaster." Who is right?
Anthony says:
The letter was G and the question was "titles people have" I put general and someone put Gardner does that count. Does Gardner counts as a title?
maya says:
CariLynne - you are right you can not use adjectives for the answer the article or clothing or the dress is the answer and it has to start with f.
Jodie says:
Can you use "tea, iced" as an answer for "Something that is cold?"
Gary says:
If the question is "Name a thing you save up to buy" and someone says LeBron James is that allowed? I challenged it because a human is not a thing.
Emily says:
Erin- we are living in a parallel universe. My family played tonight and had ‘A' and category was sweet things. We got in a heated arguement over apple, apple pie, and apple juice! We finally decided that everyone got points because they were three distinct things...but who really knows?!
Erin says:
If the letter is "A", can points be taken for apple pie, apple cider and apple core? We are having huge disagreement!
Bob says:
Minneapolis, Minnesota. Does that count for 2 points?
Kris says:
If one person has "Minnesota Twins" and another person has "Minnesota Wilds", do they both get the point or neither?
Jade says:
In ur own answers could u put "king" and "kingfishers"
Joy says:
Can you use maple syrup and maple ice cream as two different answers in the same round?
Jami says:
I lost the official scattergories game rules that came with the game and was relieved that I could print them out again.
Kenny says:
Can you use pronouns?
Judy says:
I say no, it has to be an article of clothing .
Thomas says:
I agree with you. I may be a lot like your friend, as I like to win (or to do well) but my brain checks out under pressure.
Troy says:
In the rules it has a way to determine if an answer is acceptable. All those playing would vote to on it. It's listed in the fifth section of "Rules for Acceptable Answers". If the group accepts it - it counts, if not - then it doesn't. You can read the rules here (or click on the "Game Rules" tab at the top of this section): http://www.hasbro.com/common/instruct/Scattergories_%282003%29.pdf
CariLynne says:
A friend of mine is convinced that you can use adjectives as the main letter. For example, the category is Articles of Clothing, and you have F as your letter, and he chooses Frumpy Dress. I argued that the article of clothing was the dress, not the frumpy. He says he's right. What's your opinion?
©2022 Board Game Capital - About Us