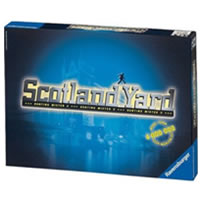 How To Play Scotland Yard (Instructions)

The board game Scotland Yard is an interesting and different game since the game can and will change depending if you are Mr. X or a detective. Both have different rolls in the game. Mr. X is on his or her own but the detectives work together to find Mr. X.

Travel through Central London using their mass transit system (buses, taxis or the underground) to find Mr. X or to get away from the detectives. To take certain forms of transportation, you must be on the correct boarding spot and have the correct fare - no ticket, no ride! Scotland Yard is a strategy/mystery game and can be loads of fun for a larder group of people. Check out the board game Scotland Yard today!

The game Scotland Yard should come with the following components. These are based off of the original game and don't include components from any expansion packs or different editions.

If you're Mr. X, you must avoid capture long enough for the detectives to run out of their fare tickets. If you're the detectives, one of you must capture Mr. X by landing on the same space Mr. X occupies.

Please keep in mind that the official Scotland Yard rules and instructions could be different depending on the game version you have. The rules below are some of the exact directions that came in the original packaging and will teach you how to play Scotland Yard. Download these original PDF game rules or print them for later use.

Share with us your comments, funny stories, tips, advice, strategies, creative ways to play, questions about how to play, problems with the directions or anything you want about Scotland Yard. All submissions will be reviewed within 24 hours.

Abir says:
Well interesting game and gives a lot of fun
Ethan says:
I'm confused, does Wendy love this game or hate it? I just played it over the weekend and I'll have to say it is a fun and addicting game. I had the rules explained to me so learning how to play wasn't too bad. The original Scotland Yard is kind of pricy but I'm seeing that there might be a newer version out for cheaper?
Mauro says:
I was a little slow learning how to play this game. I thought is was pretty lame until the end when I finally caught on and saw the point of the game. When it finished I was the one begging to play it again. I glaze over when the rules are read so seeing it and playing it definitely helped.
ruby says:
I think this game is very interesting,but quiet difficult!
Andy says:
The 2014 easy version of the rules just make NO sense! What is the point of the travel log if it is just to record where Mr X has been to?
Professor Moria says:
Too easy to evade detectives. If detectives get close use 2x move card to get clear of the detectives. Opening moves are towards an underground stop. Slightly less entertaining than watching paint dry.
ansh says:
it's rules are difficult to understand but the game is very interesting
Gayle says:
I played this game when I was 10 and now I play it with my kids. It's a fun and brainy game.
Mary says:
I know the rules are written as easy as possible but this game was much easier for me to understand how to play after someone else explained the rules to me. I guess I'm just a hands on person that likes to ask questions and gets confused in all the words. Overall fun game and definitely a lot of strategy involved if you are playing competitively.
Wendy says:
I love this game. It is worth buying and playing at a family.
©2022 Board Game Capital - About Us