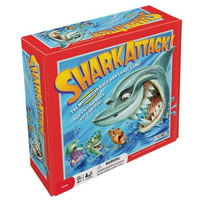 How To Play Shark Attack (Instructions)

Shark Attack is an easy game to learn which makes it great for younger toddlers. Just make sure you have two "AA" batteries if you're getting ready to play Shark Attack, otherwise that shark won't do much attacking.

The game Shark Attack should come with the following components. These are based off of the original game and don't include components from any expansion packs or different editions.

To win the game of Shark Attack be the last fish swallowed by the shark!

Please keep in mind that the official Shark Attack rules and instructions could be different depending on the game version you have. The rules below are some of the exact directions that came in the original packaging and will teach you how to play Shark Attack. Download these original PDF game rules or print them for later use.

Share with us your comments, funny stories, tips, advice, strategies, creative ways to play, questions about how to play, problems with the directions or anything you want about Shark Attack. All submissions will be reviewed within 24 hours.

Nancy says:
Hi, I have the 1988 board game, however the shark moves backwards. Am I doing something wrong?
Meg says:
My kids love this little game. Something with fish and be able to bite you gets them all excited. Easy to learn how to play and you can even make up your own rules.
©2023 Board Game Capital - About Us